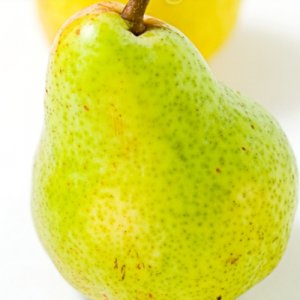 Analysis of the genome sequence has shown pears have some surprising differences to apple at the DNA level.

The European pear genome - sequenced by scientists at Plant & Food Research in New Zealand and the Istituto Agrario di San Michele all'Adige (IASMA) in Italy – has 600 million base pairs of DNA encoding around 51,000 genes on 17 chromosomes.

By comparison, apple has 25% more DNA (750 million base pairs) with 57,000 genes on the same number of chromosomes. Many of the differences between the two correspond to areas of the genome that switch genes on or off.

"In ancient Greece, pears were lauded by the poet Homer as the 'gift of the gods', thanks to their melting texture and the unmistakeable aromatic pear flavour," says Dr David Chagne, the leader of the project.

"We hope that by sequencing the genome of the European pear, with its melting flesh and wonderful flavours, and comparing it with the genome sequence of apple and Asian pears, which tend to be crisper, we will be able to identify how flesh texture in these fruits is controlled.

"Ultimately, this will allow us to develop tools to speed up the breeding of new varieties of pear with novel combinations of texture and flavours."

Most surprising to the science team was that the number of genes controlling texture, which was expected to be higher in pears due to the way the flesh melts in the mouth, were the same as that of apple. However, the research showed that in pears one family of these genes in particular, known as expansins, was significantly more active.

Dr Sue Gardiner, the leader of Plant & Food Research's Breeding Technologies Group, believes the project is one of the fastest genome sequencing projects undertaken so far, taking only two years from inception to completion.

"This genome sequence project was led by scientists at Plant & Food Research, and the hard work and strong collaboration between all the scientists involved, both in Italy and New Zealand, has meant the sequence has taken much less time to deliver than other genome sequencing projects," she says.

This divergence from other members of the Rosaceae family was caused by a duplication of the genome and corresponds to an era of major evolutionary activity, thought to be a genetic survival response to an event that caused the extinction of many species, including the dinosaurs.

Gardiner is presenting the findings of the research at the Rosaceous Genomics Conference at IASMA in Trento, Italy this week.

Researchers behind a new tool say it gives Australian dairy farmers the potential to double the net income per cow that arises due to genetic improvement.