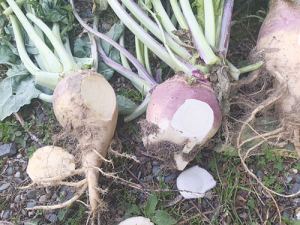 PGG Wrightson is blaming human error for a mix-up resulting in farmers, mostly in the South Island, planting a livestock swede of a variety older than they ordered.

The new product, Cleancrop Hawkstone, is a yellow-fleshed swede intended to replace the white-fleshed HT-S57 variety this season.

David Green, New Zealand seeds manager for PGG Wrightson, confirmed that everyone who ordered Hawkstone this season got HT-S57 instead.

He says 9300ha of the crop had been sown by 556 farmers, about 90% in the South Island and 90% of that in Otago and Southland, the main swede-growing regions.

The error came to light when an agronomist noticed the wrong colour bulb during a farm visit.

Green says PGG Wrightson has set up a contact point for all affected farmers. It is too early to discuss compensation, he says; the focus now will be to talk through the issue. Nutritionists or veterinarians may visit some affected farms.

“Dawn-to-dusk effort is going into communicating with people -- and all industry stakeholders, e.g. DairyNZ, Beef + Lamb NZ, Federated Farmers, NZ Veterinary Association -- to make sure first and foremost that farmers themselves are aware of the issue,” Green told Rural News.

“There is no silver lining to this, but we are conscious that we are at least three months away from anybody starting to feed these crops so the more time we’ve got the better that allows us to make decisions.

“On some properties we’ll be able to re-prioritise feed so the inconvenience will be minimal. On some other properties we will have to work… through what the best options are.”

The HT (herbicide tolerant) S57 was implicated in stock deaths in the winter and spring of 2014 but Green says a large DairyNZ peer-reviewed study also implicated other cultivars and the extremely warm winter weather.

Green says that in warm weather, all brassicas tend to go into a reproductive phase during which compounds called glucosinolates accumulate in the leaves. That occurred unusually early in 2014.

He says the HT cultivar was being phased out not just because of the 2014 issues but also because it was reaching the end of its product life cycle. Some 47,000 ha of the variety had been sown over seven years, and Green says farmers had continued to use it successfully after 2014.

The ‘error’ will be “quite inconvenient” for some farmers, NZ seeds manager for PGG Wrightson David Green admits.

“Certainly in some situations a farmer might have purchased the Hawkstone product because he might have intended to feed it to younger stock, or to dairy cows.

“We have made a serious mistake here and we’re really sorry for what has occurred. We handle tens of thousands of tonnes of seed a year in our business and we pride ourselves on our quality systems.

“This is not a good thing, but a lot of people have contacted us and said, ‘we’ve used it before and we don’t see that it’s going to be a major issue at all’.”

Southland Federated Farmers president Allan Baird says HT swede had given “a lot of grief” in 2014, but the industry had learnt a lot about how and when to use the crop.

If the swedes had been sown for winter grazing it shouldn’t be a problem because even the HT variety wouldn’t normally move into its reproductive phase before use, Baird told Rural News.

However, many dairy farmers may have sown it to feed a herd returning to the platform in spring. If it were sown in the expectation it would be good for spring feeding “there could be trouble,” he says.

“That will mean working with each farmer on a case-by-case basis to see what his feelings are regarding the effects on him. If it was a spring crop and he now has no spring crop then he would have a much bigger issue than if it had been planted for winter feed.”