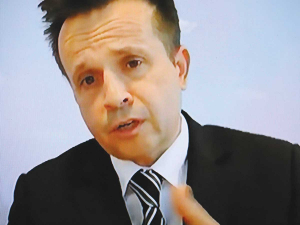 Rising protectionism is one of the major concerns of New Zealand exporters in the light of COVID-19.

NZ’s chief trade negotiator, Vangelis Vitalis, told Parliament’s Epidemic Response Committee that as a result of COVID, many countries will resort to protecting their own economies. NZ exporters fear this will make it much harder for them.

Vitalis says exporters are also concerned about the logistics of getting goods to market, but they have praised the work done by MFAT, NZTE and MPI in keeping freight lines open.

He says exporters are also fearful about the wider implications of losing market share.

“The problem is that if the export sector becomes weaker this will have an impact on unemployment and incomes in the regions,” he explained. “They also make the point that a lot of those exporting have around them a cluster of small and medium-sized business that service them, which are vital to their operations.”

Vitalis says exporters are concerned at what he calls the fragmentation loss of ‘trade architecture’ around trade agreements – something that NZ has extraordinarily strong views on. This particularly relates to agreements endorsed by the World Trade Organisation (WTO).

It is said that protectionism made the great depression of the 1930s worse and longer. Noting that lesson from history, ministers, MFAT – along with NZTE – have embarked on a programme to ensure that work on FTAs still progresses.

Rural News understands that a virtual round of negotiations with the EU on our FTA with them has taken place and that work on the upgraded China FTA is on schedule. Work is also being done on an FTA with the UK in preparation for when that country is ready to begin negotiations.

Telephone diplomacy is the new order of the day with Trade Minister David Parker having regular discussions with his counterparts in Australia, Canada, UAE and Singapore to name a few.

Vangelis Vitalis says MFAT is embarking on a three-pronged approach called the three Rs – re-tooling, re-integration and re-energising to front foot our recovery.

Re-tooling, he says, is about working with countries that share NZ’s desire for free trade. He says it’s troubling to see the talk about protectionism – especially around agriculture which is such a major contributor to the economy, both externally in terms of dollars earned and employment on the home front. He says a recent success was persuading Indonesia to allow NZ onion exports into that country.

Re-integration, is about looking at the issue of trade architecture – things like the role of the WTO and FTA’s and winning support for this approach. He says NZ is devoting considerable effort to pushing for rules-based free trade.

“Legal enforceability of the systems is so important to us,” he told Parliament’s Epidemic Response Committee. “We also know that some of the major economies we would normally look to lead on these things, but they look unlikely to be unable to do this in the near future. So, we are working with smaller and medium-sized powers to construct the building blocks to support that rules-based system.”

He says while in NZ people are talking about ‘shovel ready projects,’ trade negotiators are looking to have some ‘signature ready projects’ – such as FTAs and other agreements in place.

Vitalis says re-energising relationships is about telephone and Zoom diplomacy with Minister Parker’s ongoing contact with his counterparts.

“It’s about telling the world we are back in business and that our export sector is ready to supply global needs,” he says.

Vitalis says as a nett food producer, NZ has a distinct advantage and it’s about reinforcing that message.

At this year's National Fieldays, the Power Group (PFG) set out to thank farmers and contractors for their efforts in keeping the country going through Covid in 2020 with a 'We Love Farmers' theme.

OPINION: Questions have to be asked about the Government's Covid strategy.