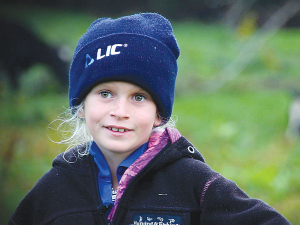 The website will also use webinars and Vlogs (video blogs) as part of it visual story telling focus.

DWN says looking to create deep emotional connections is the drive behind ‘Our People. Their Stories’, which has already attracted television coverage.

The first story features Lucy O’Reilly (9), who prefers the latest dairy farming catalogues to children’s books. This was released to coincide with the website launch last Tuesday.

Lucy has her own herd and loves nothing more than helping out on the farm near Tirau, Waikato.

“We all just fell in love with Lucy,” said DWN chief executive Jules Benton. “Her story is real, authentic and is from the heart.

“We sent some early footage to Seven Sharp which resulted in Hilary Barry coming down to the O’Reilly’s farm to spend a morning with Lucy for her ‘Hilary Helps’ segment that ended up being the story of the week for the show.”

Benton says DWN is rolling out a series of short, motivating visual stories, professionally produced, over our social channels and platforms.

“We are treating them like a mini television series and some of the content will also be used to pitch to mainstream media.”

The ‘Our People. Their Stories’ project is intended to have DWN engage more deeply with its members and ultimately the dairy industry.

“Stories create deep emotional connections and they start conversations,” says Benton. “We [will tell] stories that will transport and touch people, inspire, educate and engage and provoke an emotional response.”

Each story will have a unique angle to make it special, Benton says.

“We want to showcase all the differing elements of agri-industry in New Zealand, and how women are making a substantial difference to the success of dairy businesses that contribute to a better New Zealand. There are amazing stories we can’t wait to show.

“DWN is driven and inspired by people actively involved in the agri industry at all levels. By celebrating news, achievements and shared experiences, our members and wider rural communities are empowered to strive for more.”