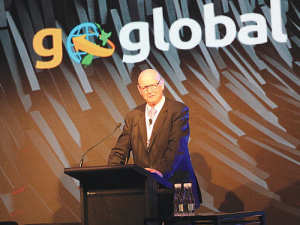 Meat Industry veteran Sir Graeme Harrison reckons the sector was summed up by a 1994 cartoon captioned, ‘we can’t see, we don’t hear and we don’t talk’.

“I think that is pretty typical of a lot of New Zealand’s export sector to be frank,” the ANZCO Foods Ltd founder and chairman told the recent ExportNZ conference in Auckland.

“Really what we’ve got to do is join hands and collaborate. That is certainly what ANZCO has done in its business relationships around the world.”

Harrison also gave a plug for the NZ International Business Forum that started in 2007, which he chaired for its first seven years.

“This group of likeminded organisations, like Business NZ and NZ chambers of commerce, worked together to try to build NZ’s business case and market access,” he says.

They have a good working relationship with government and appreciate the efforts of trade ministers.

“As an export sector you should be willing to collaborate, and put the pressure on government and make sure the political parties - no matter what their colour - finally realise how important agriculture, the agri-food sector and the wider export sector is to the NZ economy,” he says.

ANZCO is the new player in the top four big meat companies, Harrison says – alongside Silver Fern Farms, AFFCO and Alliance Group. These four companies handle at least three quarters of the total production. ANZCO sits at 20% of beef and 10% of sheep meat. Its turnover is just under $1.5 billion.

Its growth trajectory has risen almost continuously throughout the years. But NZ livestock numbers have been declining and its business direction has changed.

The company’s 11 sites are not what people imagine of the meat industry. “It is a mass of stainless steel, not too different from the NZ dairy industry.

“It is in a range of products - blood products to animal tissues to various food solutions, proteins, etc. That is our direction.”

When they started contract processing in Korea in the 1980s, Koreans were still very poor. Yet at the time of the signing of the NZ Korea free trade agreement in March 2015, our per capita income was almost the same - US$33,000.

“We are now on a path to having our tariffs removed over 15 years from 40% down to zero. It was a good trade agreement for the NZ beef sector, and it was good overall for all sectors in NZ.

“The growth of the middle class in Asia is there for all of us to note. The Economist summed it up well last year, saying that before the late 1990s China barely had a middle class; whereas in 2000, five million households earned between US$11,500 and US$43,000 a year in current dollars. Today 225 million earn that much.