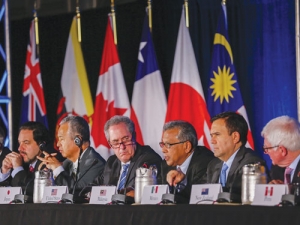 Expect protest marches, outrage and nonsensical claims – from self-professed academic experts to gloried All Blacks' water-boys – it has been confirmed that New Zealand will host the formal signing of the TPP early next month.

They are looking at possible dates with the 11 other countries involved in the deal.

Currently TPP participants are also legally verifying the text. When that it finished it will be made publicly available and will need to be signed, McClay adds.

NZ is the repository, meaning we take responsibility for holding the final text when it is signed.

"Every country has a different process to go through domestically to have the ability to sign the agreement and they need to wait until all 11 countries have finished that process before final decisions on a venue and a date can be made."

On the free trade negotiations with the European Union, McClay says he met with the EU trade commission head Cecilia Malmström in Nairobi in December and they agreed McClay would travel to Brussels early this year and meet with her again.

"We have agreed we want to make significant progress during this year, but it is likely to take a couple of years before we can be close to reaching agreement on an FTA with the European Union," he told Rural News. "It is a big priority for our government."