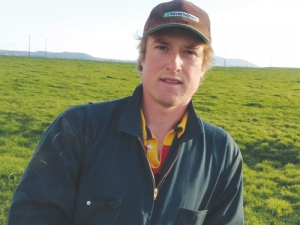 Waikato farmer Brad Kilgour was so pleased with the Marco turnips he planted this year that he will double his planting this coming summer, says the supplier, Ravensdown.

"It's only a jump from two to four hectares," Kilgour commented. "The turnips fitted in well with changes to our farm system and the cows loved them."

Kilgour manages an irrigated 75ha farm owned by his parents, Simon and Carol Kilgour, near Reporoa. He milks 240 cows, averaging 120,000kgMS for the past three years.

The Kilgours, who buy their seeds, agrichemicals and fertiliser from Ravensdown, also did soil and pasture sampling to support the changes to their farm systems.

This season they converted two thirds of the farm to centre pivot irrigators from a Bosch long lateral system. This allowed them to introduce walk-over-the-top cropping to their pasture renewal, including the turnips and whole crop cereal silage.

The paddock concerned was back in permanent pasture before winter. The barley was planted at Labour Weekend and harvested late January. The turnips were planted in the same paddock early February.

"Due to the turnips' short maturity, 60 days, we were able to feed it out for three weeks from early April, which helped us to slow our grass rotation," Kilgour says. "A key to this was being able to irrigate through February to get the crop established."

Ravensdown agronomist James Bryan measured the crop at 10 tonnes yield in those 60 days – a growth rate of 160kgDM/day.

The critical element in the planting of the turnips was that it switched feed from when it wasn't needed in the summer to when it was needed in the autumn.
"Grass under water in that time would probably grow only 80kgDM in that period. The turnips proved to be a good, cheap feed per kilogram," says Kilgour.

"Our cows had never seen turnips before because we've never cropped. It only took a couple of days and they were cleaning the breaks up well."