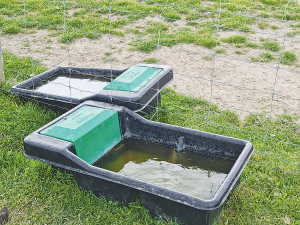 RSTWG chair and Clutha District mayor Bryan Cadogan says there are distinct differences between rural and urban water and it's not one size fits all.

Despite attempts by the Department of Internal Affairs (DIA) to ease rural water users concerns about the Government's contentious 3 Waters reforms, worries remain.

The Rural Supplies Technical Working Group (RSTWG) has made 30 recommendations in a recent report to DIA, including that the country's 100 or so council-owned rural water supply schemes be transferred into the four new co-governed water entities.

It adds that tens of thousands of privately-owned rural water supply schemes are not included in 3 Waters reforms.

RSTWG chair and Clutha District mayor Bryan Cadogan says rural drinking water schemes are critical to the health and livelihood of rural communities, and each scheme is unique.

"We recognise that rural drinking water schemes often provide water for farming as well as for people to drink. There are distinct differences between rural and urban water - and it's not one size fits all."

Cadogan claims his group has listened carefully to the concerns of rural communities.

"The RSTWG agrees that, in general, council-owned rural drinking water schemes should transfew to the new water service entities," he says.

"But we also recommed that there should be a pathway for some council-owned rural supplies to revert to ownership by their users. This would apply to schemes that are critical to farming and whose users have the capability and resources to operate them without support from councils or water services entities."

Meanwhile, in terms of the privately-owned rural drinking water schemes, which are not captured by reform and so do not shift to water service entities, Cadogan says for most it will be several years before they need to register as a supplier with drinking water regulator Taumata Arowai and "demonstrate compliance with it requirements to provide safe drinking water".

Waimate District Council chief executive Stuart Duncan believes the working group was limited by its scope - due to the overall 3 Waters reform objectives.

"It recommends that all council-owned rural schemes transfer to the new entities," he told Rural News. "But rural councils would not continue to operate their rural schemes if the urban supplies are removed - taking the bulk of the equipment, assets and resources."

Duncan says the RSTWG report should have begun with the history of rural schemes being constructed as stock water races and were not designed as potable water schemes.

"I believe a more sensible approach would have been to draft subordinate legislation, that firstly classified rural schemes and made provision (guidelines) for certain classes of schemes to be exempt from the NZ drinking water standards."

DIA will now consider the RSTWG's report and feed its recommendations into advice and draft policy, which will be considered by Cabinet for inclusion in 'Bill Two' of the Three Waters legislation.

The RSTWG made 30 recommendations, which are set out in full in its report. Its key suggestions affecting rural water supplies are:

The Rural Supplies Technical Working Group (RSTWG) has made 30 recommendations in a recent report to Department of Internal Affairs (DIA), including that the country's 100 or so council-owned rural water supply schemes be transferred to the four new co-governed water entities.