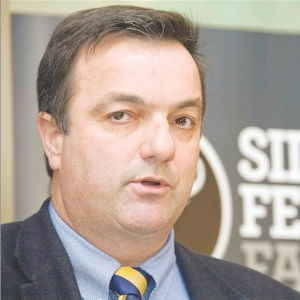 At the start of its annual round of shareholder meetings, last week, Silver Fern Farms announced chief executive Keith Cooper was “stepping down” after eight years at the helm. It follows Alliance’s July announcement that its chief executive for the past nine years, Grant Cuff, would be leaving in December.

“This represents a huge opportunity for the chairs of both cooperatives to get together and genuinely address the problems that beset the industry,” MIE chairman John McCarthy told Rural News.

“They could cut across and appoint one chief executive for both cooperatives. Sure, have a caretaker in the meantime, but make it clear to the candidates you are working to merge the businesses.”

Recruiting for a chief executive to see through such a merger and lead the resulting business would attract a much higher-calibre candidate than either co-op is likely to procure on its own, he argues. “This is a massive opportunity to bring in much needed human capital of decent calibre.”

“He inherited a poison chalice that was the legacy of the Richmond takeover and that has brought the whole industry to its knees. It created huge animosity and we’ve paid the price ever since. But we can’t keep looking back. We have to look forward,” he stressed.

MIE’s business plan for industry reform, due later this month, would provide detail on how reform might be achieved. Overcapacity costs the sector $450m/year and that has to be addressed for any investment to yield the returns it should, McCarthy says. “We have to right-size before we can upsize.”

That needs to be a cross-industry approach because companies would be reluctant to go it alone in closing plants because competitors would simply mop up the supply, making vulnerable the firm incurring the closure cost.

Silver Fern Farms signalling a return to profit was welcomed by McCarthy who suggested “all farmers who’ve supported our thrust for change should take a bow” because of it.

“The cooperatives have put their best foot forward and a lot of that is because of the pressure brought to bear by farmers. As a group farmers are the only ones who can effect change.”