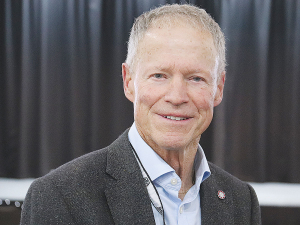 High praise for the recently signed free trade agreement (FTA) between the UK and NZ has come from one of the country's most experienced politicians in the trade policy area.

Sir Lockwood Smith has told Rural News the FTA is an excellent agreement. He believes it is better than many NZ farmer organisations expected and will have long term strategic value for the country. He describes it as probably one of the most advanced trading agreements in the world.

Smith was a former trade and agriculture minister in the 1990s and went on to become NZ's High Commissioner in London between 2013 and 2017.

"I don't think anyone could have asked for a better agreement. NZ has gone from having a total quota for beef in the UK of about 400 tonnes, to a situation where we now have the prospect of free and open trade with no tariffs, after a period of time," he says.

"Likewise, with lamb we have had all this concern around Brexit about the splitting of the quota between the UK and the EU. Now, instead of all that hassle, in a few years' time we will have open and tariff free access to the UK."

Finally, he says NZ dairy exports to the UK that have really fallen right off but that will now change under this FTA.

Smith says the transitional arrangements around beef and lamb were absolutely necessary because UK farmers were never going to agree to an immediate opening up of their market. The agreement also has clauses on what are known as 'equivalents', meaning that both countries recognise their standards are of the same high quality, but the way of achieving this may be different and that this is okay.

He says the FTA includes a forward looking chapter on the environment, which includes climate change, water quality and deforestation. There are also chapters in the agreement on animal welfare and antimicrobial resistance - the latter now an issue world-wide with concerns of animals being 'fed' antibiotics.

"I think the chapter on animal welfare is a sensible outcome and one that outlines a process for dealing with the issue, but not one that would frighten off some countries," he says.

In his former role as High Commissioner to London, Smith says he spent a huge amount of time talking to UK farmers in an effort to persuade them that opening up their market would ultimately benefit them, as it did NZ farmers.

He is now a member of the UK Trade and Agriculture Commission (TAC), which initially had a role of pointing out to farmers throughout the UK and Northern Ireland the value of freeing up trade.

Smith is the only non-UK member on the TAC, which is made up of agricultural experts whose role now is to scrutinise FTAs to ensure they comply with UK standards on animal welfare, plant and animal health, the environment and trade law and policy.

Lockwood Smith believes that one of the reasons the FTA is so good and was negotiated so quickly is that the UK wants to gain membership of the CPTPP (Comprehensive and Progressive Agreement for Trans Pacific Partnership).

He says having FTAs with existing members - Australia and NZ - provides leverage for this to happen. Smith had personally talked to Boris Johnson, before he became Prime Minister, and also some of his colleague and says they could all see the value of the CPTPP to Britain.

"Boris could see that it was strategically one of the smartest things they could do after Brexit," Smith told Rural News.

"He and his colleagues could see that it was an exciting strategic play for the UK and critical to their aspiration to become global Britain again."

While the FTA has been signed by the respective countries, it still has to be ratified by their parliaments.

In the case of NZ this is a relatively simple process. Smith says it will go to the Foreign Affairs and Trade select committee who will report back to parliament and then it will be voted on.

"The risks of it not being ratified are nil," says Sir Lockwood.

But in the UK the process is more complicated. Firstly, it will be scrutinised by the TAC to make sure it complies with UK standards. However, Smith believes that the prospect of UK membership of CPTPP will be an incentive to get the deal approved in a timely way.

Meanwhile, he says the FTA with the EU - which is currently being negotiated - is going to be much more challenging. Smith's not expecting an outcome like that with the UK and says this is because the EU is inherently protectionist and internally focused.