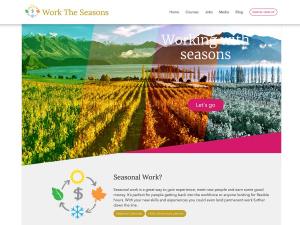 The front page of the Work the Seasons website.

But they say getting seasonal labour is always a battle and they need a number of strings to their bow.

The Ministry for Social Development’s Work the Seasons online platform has seen a big jump in both job listings and seekers as summer fruit and meat processing activity picks up.

Horticulture jobs posted by employers rose 169% from 271 in September to 728 in October. In total there are 1064 live job vacancies on the website.

A 25% increase in new jobseeker registrations from 875 to 1097 occurred over the same period.

The free website launched in 2016, aimed at making it easier for people aged over 15 years to find a job and for employers to find the right person.

Almost 87% of the new jobs listed in October were in horticulture and meat processing in nine regions.

Last year they had real difficulties finding enough workers, but they are well ahead this year so far.

Silver Fern recruits through October and November for the real peak which starts in December and runs through to the end of February.

Work the Seasons is now one recruitment channel they use. They now have seven plant listings on there and are getting a supply of people through that.

“It is easy to do and easy to set up. It is not onerous at all.

But better alignment of all their recruitment tools across the whole business is likely the reason they are in a better position this year, he says.

Processing plants had previously tended to do their own recruitment campaigns.

“This year we are more systematic and more uniform across all of the plants.  We are more in control of our reach and trying to get out to people.”

They are much more organised in social media such as Facebook and Snapchat this year.

“We are definitely better off the there.  It is always hard to know whether that pulls in more punters or not of course.  You can certainly get the statistics around how many people are looking at your ads and that sort of thing.”

Work the Seasons definitely seems to attract backpacker applications which are useful, he says. Most of their seasonal workers are inexperienced, so they are trained and start in the more basic jobs.

Poy says all the primary sector is fighting for labour at the same time because “things grow in summer”.

“It is always a battle and it seems to be getting harder each year but you’ve just got to get out there and do your best.

“But we’ve been a bit more organised this year and, touch wood, so far things are going well.”

Nelson-based Hoddy’s Fruit Company used Work the Seasons last season and compliance and logistics manager Mel Ewers says they found it a better option than the previous website they used.

However some people applying from outside New Zealand did not have work visas and other immigration requirements in place.

“I have put some ideas to Work the Seasons to make sure that the people who use the website have got all their documentation in order first up,” she says.

However the ‘hits’ from people in New Zealand were useful. Many travellers now use the various seasonal websites and that can also spark off word of mouth interest.

Hoddy’s recruits about 100 seasonal workers for a February start, mainly for the packhouse.  Online recruitment will start in earnest in January.