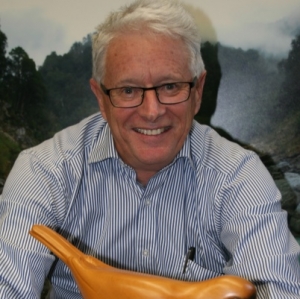 The award is given annually to those who have excelled in animal pest management.

Simmons became involved in biosecurity in the late 1980s following the formation of regional councils from a disparate group of local authorities. He helped develop national standards for pest control, while helping to drastically reduce the incidence of bovine tuberculosis (TB) in the Waikato through better control of possums.

"This reduction in bovine TB has been really satisfying given the way it helps protect the regional economy and the possum control involved has a range of other environmental benefits at the same time," says
Simmons.

He found it a nice touch that the trophy for his national pest animal management award was a replica of a kokako.

One of the most satisfying highlights of his work over the years, he says, has been involvement in increasing the population of the endangered forest bird in the King Country from "a few pairs" in the late 1980s to "hundreds" today.

"That increase – which we've helped achieve along with the Department of Conservation and the Otorohanga Zoological Society – shows what can be achieved through agencies working together on protecting our threatened, iconic bird species," says Mr Simmons.

He is soon to move on from his council job and take up the interim general manager's position at the Maungatautari Ecological Island Trust, which is overseeing the pest-proof bird sanctuary project around Maungatuatari near Cambridge. He is also planning consultancy work.