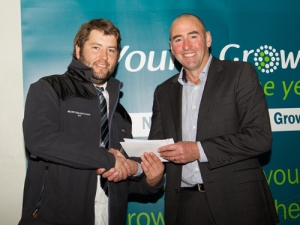 Tom Dalziel, 27, from Thomas Bros in Riwaka has beaten off tough competition from four other entrants to be crowned Nelson's Young Fruit Grower for 2016 at Friday night's gala dinner.

The day-long competition at Hoddy's Orchard in Nelson on Friday saw competitors battle it out in a series of practical and theoretical challenges designed to test the skills needed to run a successful export-focused orchard.

Dalziel, 27, works as an Orchard Supervisor at Thomas Bros. As well as taking out the title of the region's Young Fruit Grower, Dalziel received top marks for the First Aid, Human Resources, Orchard Analysis activities as well as winning the Speech section.

Dalziel won a cash prize of $1,500 and an all-expenses paid trip to represent Nelson at the national Young Grower of the Year in three weeks' time.

"It was a tough battle against some of the region's most capable young growers," Dalziel says. "I'm looking forward to competing at the national final and will be stepping up my preparation over the next few weeks."

"The Young Fruit Grower competition showcases and celebrates our industry's top young talent each year. We're very fortunate to have such loyal and passionate sponsors who support the event and assist in the development of our industry's future leaders by testing the contestants knowledge and skills," says the competition's coordinator, and local orchardist, Andrew Kininmonth.

"Tom and his fellow competitors are great examples of the young people who are entering horticulture. The future growth of our industry is dependent on our ability to attract young growers like Tom who are highly skilled and enthusiastic.

The winners from five regional events go forward to contest the final.

The competition is part of Horticulture New Zealand's strategy to support the growth and development of New Zealand's future grower leaders.