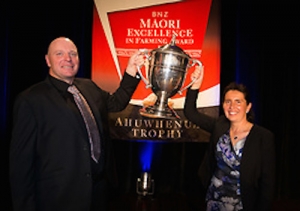 The winner of the 2015 Ahuwhenua Trophy for the top Maori sheep and beef is Mangaroa Station owned by Bart and Nukuhia Hadfield.

The couple farm in the Ruakituri Valley, about an hour's drive north west of Wairoa on the East Coast of the North Island.

The announcement was made by the Minister for Primary Industries, Hon Nathan Guy at a special function in Whanganui. The event was attended by 650 people including the Minister for Māori Development, Hon Te Ururoa Flavell, the Māori King Tuheitia, and other dignitaries, politicians and leading agribusiness people from throughout New Zealand.

The Hadfields were chosen from two other finalists, Paua Station owned by Paerengarenga Incorporation based at Te Kao in the Far North and Maranga Station owned by Marty and Janice Charteris who farm at Tiniroto, south west of Gisborne.

John Janssen, Head of Agribusiness for the Bank of New Zealand, the principal sponsor for the Ahuwhenua Trophy competition, says the standard of this years finalists was outstanding. He says this shows that Māori agribusiness has come of age and that some Māori farmers feature among the best farmers in the country.

Also announced at the event in Whanganui was the winner of the Young Māori Sheep and Beef Farmer of the Year.

She was 22 year old Hannah Wallace from Wairoa is the first female to ever win the Young Māori Farmer competition. Te Tumu Paeroa Chief Executive Jamie Tuuta presented the award and he, along with Minister Nathan Guy, acknowledged the strong female presence in this year's competition signalling a new direction in leadership.

The other finalists were Taane Hubbard, also from Wairoa, and Hemoata Kopa from Matawaia in the Bay of Islands.

Hannah Wallace works as a Shepherd General and splits her time between two sheep and beef properties. On a typical week she works three days on the family property which is owned and managed by her parents Richard and Harmony Wallace. It runs 5600 stock units across 1500 hectares. The rest of her time is spent managing Rotanui Station, a part of farm incorporation Te Whakaari, with her partner Jeremy.

In her early career she did a brief stint dairy farming and was an entrant in the 2012 Young Māori Dairy Farmer competition. She says that although she enjoys both types of farming, her dogs are what motivate her to stick with sheep and beef.

Next month will see the first finalists competing for the prestigious Ahuwhenua Trophy in horticulture announced at Parliament.