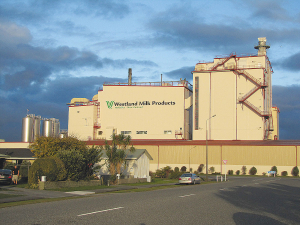 Senior staff of the Chinese dairy giant Yili will arrive this week to take the reins of their new acquisition Westland Milk Products.

Through its subsidiary Hongkong Jingang Trade Holding Co, Yili takes 100% of the shares in Westland, marking the end of a farmer owned co-op founded in Hokitika in 1937.

A spokesman for Yili said senior people would arrive on August 1 in Auckland where they will likely front a media conference, then fly to Hokitika on August 2 to meet their new staff and civic leaders and tour the factory.

Under the deal, Westland’s 400 farmer shareholders will immediately be paid $3.41 per share -- a total of $246 million. The rest of the $588 million purchase price will cover the struggling co-op’s debts and liabilities.

The deal also promises suppliers a guaranteed milk payout matching Fonterra’s for the next 10 years.

The sale cleared its final hurdle on July 18, with approval of the sale by the High Court. The court had initially ordered a shareholders’ meeting for them to consider and approve the sale scheme. At that meeting, on July 4, it was passed by a majority of 93.79% of votes cast, representing 89.87% of total number entitled to be cast.

In its July 18 ruling, the court said it was satisfied that relevant statutory provisions had been complied with, and the proposed scheme had been fairly put to the shareholders who were properly informed and fairly represented at the meeting.

The Takeovers Panel also had no objection to the sale proceeding under the Companies Act. The Overseas Investment Office had also consented to the proposal.

Speaking before the High Court ruling was delivered, Yili Group chief executive Jianqiu Zhang said his company’s goal was to become the most trusted health food provider in the world.

“We are very hopeful that our offer will be accepted by the High Court so that we can work towards creating a strong and secure future for one of New Zealand’s most trusted brands.’’

Meanwhile, a group of former Westland shareholder farmers still owed money by Westland are hoping Yili will now “do the right thing” and pay them out promptly.

They are among a number of former shareholder farmers who sold out prior to the sale but have yet to be paid for their shares under a clause in the co-op’s constitution enabling payment to be delayed for up to five years.

They had asked the OIO to block the sale until they were paid, on the grounds that it was not in NZ’s interest for an overseas company to retain the benefit of that debt --about $11m.

Spokesman Pete Williams says Yili does not need the money.

“It’s negligible for them. I would have thought they would do the moral and decent thing. Obviously the Westland board aren’t prepared to do that.”

Williams says there are now 12 former shareholders in the group and they would make an effort to contact the rest of the creditors making up the $11m.

“If we hadn’t gone to them we wouldn’t even have known that we just rolled over to become an unsecured creditor of Yili.”

Under the Overseas Investment Act, the OIO could apply a NZ interest test to the sale of farmland, but that did not apply to the Westland sale.

“As Shane Jones said, the way the Overseas Investment Act is set up at the moment it allows certain things to happen that are not in NZ’s best interests,” Williams says.

In its ruling, the OIO noted that Westland owns two milk processing plants, in Hokitika and Rolleston.

It also owns small portions of residential land adjacent to those factories, used primarily for noise buffers to plant operations.

“The residential land is sensitive under the Overseas Investment Act 2005 and requires consent. The processing plants are not located on sensitive land and are not subject to consent.

“The applicant has also satisfied the OIO that the residential land is likely to continue to be used for incidental and non residential use, being a noise buffer and accommodation for factory workers.”