What kind of Brexit? 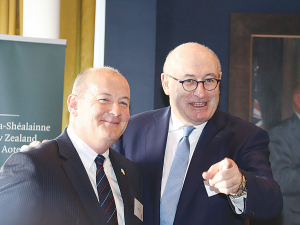 The EU Commissioner for Agriculture and Rural Development, Phil Hogan, says he hopes Brexit will end up as an emergency landing rather than a straight-out crash.

He told Rural News, on a recent visit here, that the UK’s exit from the EU depends on whether the British House of Commons can come to some agreement by the end of March, when Britain is scheduled to leave the EU.

“When you read the newspapers it doesn’t look like it’s going to happen, but I remain optimistic that some deal will ultimately be reached,” Hogan says.

“It would be unthinkable for UK industry, agriculture, jobs and the financial services if Britain crashed out. It would be a major blow to them.”

Hogan believes the UK Prime Minister Theresa May understands the Irish backstop issue, which is proving to be a major sticking point in the negotiations. But the way some ‘leave’ campaigners are behaving in the House of Commons shows they have little interest in the fragile peace in Ireland.

“The island of Ireland needs to be protected from the worst excesses of Brexit,” he says.

Hogan believes the Brexit negotiations are as important to Ireland as the 1921 peace treaty with the UK, which set up what is now the Republic of Ireland. He says the negotiations are not only important to trade for Ireland, but there is a risk that the 1998 Good Friday peace agreement could be broken by paramilitary groups in the north and south of Ireland.

Hogan says the EU, like most European countries, has been making contingency plans to deal with whatever happens on March 29 when Britain is scheduled to leave the EU.