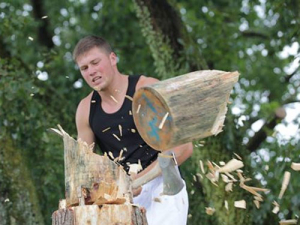 Held at the Awapuni Racecourse in Palmerston North on Friday 10 March, the awards were sponsored by CB Norwood Distributors and presented by the New Zealand Rural Games Trust alongside strategic partner Federated Farmers of New Zealand. Considered the ‘Halbergs for the rural sector’, the awards celebrate sporting excellence among New Zealand’s largely unsung rural heroes.

Jordan of Taranaki, sponsored by Husqvarna, was chosen over two other athletes for the Young NZ Rural Sportsperson of the Year title, an award which acknowledges up-and-coming kiwi youth participating in professional rural sport. In 2016, Jordan won three underhand open wood chopping world titles and is hoping to add more accolades to his belt this year.

“I’m aiming to compete in three events in Australia and 10 to 15 in New Zealand this year and I’m training hard for them every day. Husqvarna has been really supportive in helping me achieve my goals – they provide gear to help me practice and funding for travel costs which really starts to add up after a while!” says Jordan.