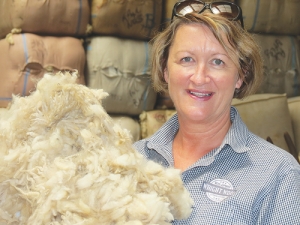 She told Rural News that the thing that she sees the most is black fibre, especially in lamb wool, and this has to be separated out for obvious reasons.

“The other thing you notice is there is bit more bulk in the wool and this bulk is actually a good thing. NZ isn’t renowned for its high bulk wools and there is definitely not as much wool per sheep.

“We see that in our bales – it’s harder to press them.

The average NZ bale weight is 165kg, but the exotic bales would struggle to get to 130kg. The other thing is the variation in wool.

You used to get a wool clip that was the same form, but now you get a variation in the fleece and that’s due to the interbreeding of the sheep flock.”

Interestingly, Wright believes a lot more farmers are moving back to Romney sheep.

Meanwhile she says it’s been a good growing season for wool in Hawkes Bay, in the amount and quality. Prices have been firm all season and there was no dip in prices around Christmas, which normally happens.

“We are already a dollar per kilo up on where we were two years ago and its maintaining that.

It’s a little bit higher this year and lamb wool took an enormous leap this year and went up a dollar from last year – so farmers have had very good year,” she claims.

But despite this Wright says farmers are much more focused on meat than on wool. She says wool makes up about 15% of a farmer’s income, so they focus on meat.

But she argues that it doesn’t take much effort to maintain a good wool clip.

“Once upon a time there was always a wool person when they went to select rams, but that has lessened over the years. That means there is no attention being paid to wool.

“However, a few farmers are approaching us and saying it is worthwhile looking after wool and making  sure they get the best wool weights and with it the best quality.”

Wright says she’s become involved in the Campaign for Wool as part of her commitment and strategy to encourage farmers to grow more wool and increase their sheep numbers.

She says in the past year about a third of her clients have increased the amount of wool they normally produce.