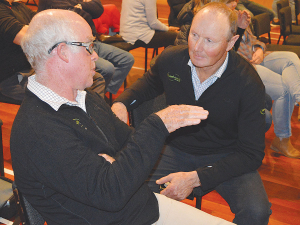 Speaking last week at a Beef + Lamb NZ (BLNZ) roadshow meeting in Glen Murray, Waikato, director Martin Coup urged farmers to think whether the decision to reject a wool levy was a good thing or not.

"You are faced with a same decision now; it's pretty much that simple," he told about 32 farmers at the roadshow.

Red meat farmers are voting to give BLNZ another six year term. They are also voting to increase the sheep levy by 5c to 75c and whether to raise the levy ceiling from 75c to 95c for sheep and from $5.40 to $5.95 for beef.

Coup says proposing a 5c rise in sheep levy hsn't been easy for the board.

"Asa board, there's nothing that irks us more than to ask our farmers for more money," he says.

Coup admitted that such a call creates a lot of strain and angst around the board table.

"We are raising the sheep levy by 5c, we are taking some more money from your pockets and we don't do this lightly."

If approved, the 5c sheep levy increase is expected to raise another $1.1 million. BLNZ has a budgeted levy income of $31 million in the 2021-22 financial year, topped up additional Government funding and other income to the tune of $13m.

In the levy period from 2016-2021, Coup says the organisation leveraged outside funding of around $63 million through the likes of B+LNZ Genetics, Pastoral Genomics, the Pastoral Greenhouse Gas Research Consortium, and the Red Meat Profit Partnership.

Coup talked about "a bell wave" of environmental issues coming towards farmers which they must deal with.

"When we drove tractors up Parliament steps, we didn't dal with those issus back then."

He warns that if farmers don't deal with the issues themselves, someone else would tell them what to do.

"We have top staff in Wellington, who are well placed, but that will require resources," he says.

Coup pointed out that the Labour Government has 65 out of the 120 seats.

"They hold the power and can do whatever they want," he adds.

"So, we have to be really strong on how to deal with that. We need top people walking into those rooms and havig great conversations and making sure we are offering some solutions."

Voting opened on June 1 and closes July 12. Coup says BLNZ is seeking more than 50% on two counts: one vote per farmer and another vote based on production.

"We have to pass on both counts otherwise we fail and BLNZ ceases to exist."

As lambing and calving get underway, Beef + Lamb New Zealand is reminding farmers to consider their carcase disposal options this spring.