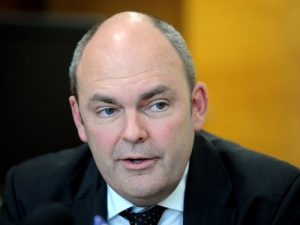 Millton says the funding announcement from the Government is a significant achievement for WRONZ.

The Government will invest $8.4m over the seven years in the research partnership which is co-funded by the WRONZ and worth $21m overall.

Millton says the new consortium takes on a selection of projects and some industry-good work. It concentrates on some work started by the last five-year consortium. But it will no longer do research on wool in carpet and flooring use which has been researched sufficiently.

"What we call the 'new uses', which are non-carpet uses for cross-bred wool, will now be researched, invested in and promoted," Millton explained to Rural News.

"We did the initial work for 'new uses' in the last consortium and they will be really fast-tracked now with the new consortium.

"That is a great thing for cross-bred wool growers. We can't continually rely on just putting wool on the floor. Although it is important, it will not in future absorb as much of NZ's production as it did once.

"Even though wool carpets are very important to the industry still, there is not the volume of carpets being used that are wool.

"The 'new uses' projects – which are a number of areas we can invest in – will have substantially different outcomes for the wool industry."

He is sure some research will transfer to commercial production before that seven years is up. But he says with research you are not sure where you will end up.

In the last five years they "certainly have got some runs on the board and some research being done by a number of providers and investors that is proving to be worthy of continued research".

Some of that information is commercially sensitive.

Of the $21m the consortium will spend over the next seven years WRONZ will put in a percentage with every project. "But every project is different so you can't say that one fits the lot," he explains.

As WRONZ chairman, Millton is delighted with the outcome but "it was an outcome we required otherwise the whole [wool] business would have become much smaller".

"MBIE looks at its projects very hard these days; they are very conscious of where they spend their money."

The Ministry for Primary Industries (MPI) is calling for research proposals for projects to investigate regenerative farming practices.

Post Covid, Ray Smith, director general of the Ministry for Primary Industries (MPI), says there is a big opportunity to take our primary product to the rest of the world.