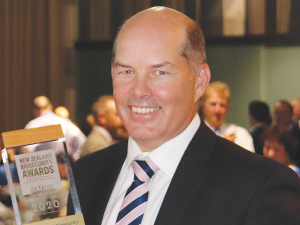 Richard Wyeth will take up his new role at Westland Milk Products in February 2021.

For the past 11 years, Wyeth has headed up Miraka, the highly successful Maori-owned dairy company based in Taupo.

He says he wasn’t actively looking for a change but says the opportunity to move was timely and a chance to advance his career.

Wyeth says Westland is a really iconic company and when he went down to Hokitika for the 75th celebrations of company, he was suitably impressed.

“I was really impressed with the people on that visit. It’s a good sized business with 700 staff and it’s a real challenge to get involved. The operation is unusual in that the milk collection area extends over 600 kilometres and that is a challenge in itself. It’s phenomenal when you think of the distance that milk has to be collected and the different climatic conditions within that area,” he says.

Wyeth says his experience in dealing with China in his present role at Miraka was probably a factor in being headhunted for the role at Westland.

He’s been travelling to China for 13 years now and he finds it quite ironic that the first dairy company he visited when he went to Mongolia was Yili.

“I have always been super impressed with Yili as a company. Their attention to detail in China is second to none,” he says.

Wyeth is under no illusions that West Coast dairy farmers have high expectations about what he might do for the company, which has struggled over the years.

His first task is to look at the strategy of the company and get a good understanding of the business before thinking about making changes. H

e says Westland has had challenges with capital structure, but this has now been resolved.

He says the milk price is also locked in.“I am looking forward to the opportunity to execute the new strategy and see how I can build the business,” he says.

Wyeth will start with Westland at the end of February and says, while he intends to base himself at the company’s office in Christchurch, he plans to spend a fair bit of time on the coast.