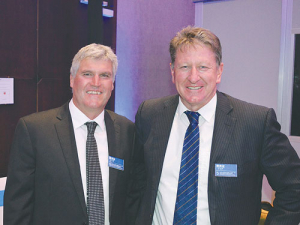 ODL owner Yili Group’s investment sends “a strong signal that Yili are in our industry for the long term,” he says.

The second stage development was formally opened at an event in Auckland recently, attended by Yili owner Pan Gang.

McFarlane, who farms next to Oceania’s plant at Glenavy, says he has seen the company grow from a grass paddock to a state-of-the art milk processing plant.

A fourth generation farmer, McFarlane has been milking cows for eight years; his family owns two farms, milking 1200 cows and runs a beef operation with 500 animals.

Speaking at the opening, he says switching milk supply to ODL in 2014 freed up capital that he reinvested on the farm.

“Supplying a local company is equally important as it helps our ability to easily contact the right people,” he says.

On behalf of other ODL suppliers he thanked Yili for support during the recent seasons of low payouts.

“Some farm businesses would not have been able to survive without that support package,” he says.

Yili says the completion of the second stage takes its total investment in Oceania to more than $600 million, substantially boosting the South Canterbury economy.

Gang says his company is committed to New Zealand, as evidenced by the significant and ongoing investment in Glenavy.

Yili has also signed a memorandum of understanding with Lincoln University; Oceania Dairy’s R&D manager Dr Philip Wescombe is now based at the university to help set up a new R&D centre.

“We consider Lincoln one of the finest agricultural tertiary providers in the world and we think this joint venture will generate innovation to the benefit of Yili Group and the wider NZ dairy sector,” Gang says.

To mark the opening Yili Group announced the launch of new premium Pro-Kido Ruihu infant formula for the China market.