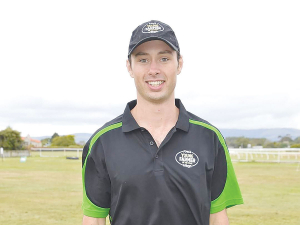 And now the 23-year-old Lincoln and Massey University graduate is walking the talk, becoming an agri-banker with ANZ in Ashburton. However, Jarman has not only done the academic side of things, he's also proven he knows a thing or two about the practical side of farming and is a finalist in this year's Young Farmer of the Year contest.

In January, he took out this year's Taranaki Manawatu regional final, blitzing the competition in every field, in his first year of competing. Jarman will now compete in the 2021 FMG Young Farmers Contest Grand Final in Christchurch, in July.

He told Rural News that an agri-sector career was always on his agenda. Born and raised on a Taranaki dairy farm, after finishing school he went to Lincoln to study a Bachelor of Agri-Commerce. This was followed by Masters in Agricultural Science (Dairy Systems) at Massey.

"My long term goal, when I reach the age and stage of family and kids, I would like to be farming," Jarman says. "But until then, I want to make a contribution in the rural professional space and save my pennies for farm ownership."

Hailing from a farming background, Jarman was brought up on a dairy farm in Inglewood, Taranaki.

The 420 cow family farm has been in his mum's family for 100-plus years, and he is the fifth generation.

However, despite Jarman's strong rural background, he could have been lost to the sector as a weather forecaster.

He says while he always enjoyed ag classes at high school, he was planning to study meteorology at Victoria, as he enjoyed science and maths.

"But I enjoyed my Year 13/Scholarship Ag class more and we had an awesome ag teacher who constantly encouraged us to look at tertiary Ag study. I was - and still am - curious about the intersection of biophysical science, business/economics, and people that come together to make food and fibre."

After finishing high school, Jarman attended Lincoln for three years from 2016 to 2018, completing a Bachelor of Commerce (Agriculture). He then started at Massey at the start of 2019 and spent 18 months doing his Master of Science (Agricultural Science) - handing in his thesis in June 2020.

Jarman believes one of the best things he gained from his time attending both Lincoln and Massey was networking.

"I was able to meet and form great connections with a wide group of people who had common passion," he told Rural News. "Now those friends are all over the country - so the network is rather widespread."

He says his education at both universities was industry-focused saying the courses had a strong practical component.

"We visited a lot of farms and were given lectures from a variety of people directly involved in agribusiness," Jarman adds. "A lot of my lecturers at both Lincoln and Massey were leaders/experts in their field - so we were exposed to the cutting edge of NZ ag science."

Jarman strongly believes that the primary sector poses an attractive career option to other young people.

"It has so many interlinked areas, which means there are so many opportunities to work in agriculture - these aren't just on-farm jobs," he told Rural News. "The sector is screaming out for intelligent, curious and diligent young people who have energy to continue pushing NZ ag forward and maintain our competitive advantage."

However, Jarman does think the sector could do more to attract more young people to work in it.

"I experienced a great connection between ag businesses at uni, by them coming to speak to us or getting involved in our courses," he explains. "This connection was not evident at high school though, so the industry could improve its connections to high schools and those school leavers."

He also believes that because university is not for everyone there is much better value in school leavers entering the workforce into ag roles - rather than going to uni because it's the 'done thing' and then dropping out.</p.

"If they are more informed of opportunities in Year 12 and 13, then they can make better decisions. This is much more important in urban schools where kids may not have any exposure to ag."

Earlier this year, Jarman started a new role with ANZ as a relationship associate - to see the other side of farming.

"I've always had an interest in finance and how it plays out in the agricultural sector," he says.

Jarman sees Ashburton as the perfect place to base himself, due to a diversity of agricultural businesses not available in other parts of the country.

"Ashburton is a critical town for the surrounding agricultural industries, and there are so many businesses supporting those farms - you've got machinery dealers, seed merchants, livestock companies, banks, accountants, lawyers - a whole developed industry."

With learning the ropes in his new job and preparing for the YFC grand final in July, there will be plenty to keep Jake Jarman busy over the next few months.