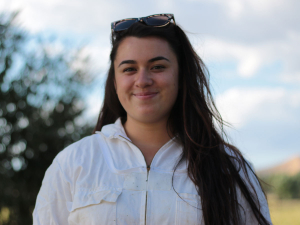 A queen rearer who is passionate about the environment, Kururangi intends to use the funds toward the New Zealand Apprenticeship in Apiculture at Primary ITO (developed in conjunction with ApiNZ).

“To me, sustainable beekeeping means you as the beekeeper are thoroughly thinking about every practice you are carrying out and being aware of the future implications,” she said. “Sustainability in beekeeping stretches far and wide, from breeding good genetics to understanding how to effectively treat bee pests.”

In fact, it was a Year 13 internal NCEA exam on sustainability – on the topic of honey bees – that prompted Kururangi to get her start in beekeeping.

“I found it really interesting and was discussing it with a careers advisor who said I should look into beekeeping,” she said. “I went on Trade Me, found a few job openings and thought, ‘I might as well give it a shot,’ so I applied.

“I find all aspects of beekeeping really fascinating. The rewards extend far beyond just working the hives,” Ariel stated. “Once you are able to grasp a full understanding of the entire cycle from start to finish you develop a huge appreciation for the hard work the bees put in but also the people working alongside them.

“I encourage young people to take the step and begin their career in beekeeping,” she said. “It is challenging but through perseverance, it’s really rewarding. I would love to see more young people in the industry!”

Scholarship donor and founder Neil Mossop started out beekeeping at age 15 with his father Ron, whom the scholarship honours.

“I was very impressed with the calibre of people that put their names forward,” he said. “It wasn’t an easy job to do.” He said that it was ultimately Ariel’s enthusiasm for self-improvement and for the future of the industry that made her stand out.

ApiNZ Education and Skills Chair Stuart Fraser stated, “Ariel’s attitude shines through clearly in her work. She is a credit to the industry, her employers and a worthy challenge to her peers to find their own valuable treasure in their career paths.”

Beekeepers to swarm to Christchurch for Apiculture NZ Conference

Beekeepers, honey producers and others from across the apiculture industry will gather at Christchurch’s new convention centre on Thursday 30 June and Friday 1 July for the 2022 Apiculture New Zealand Conference and Trade Exhibition.