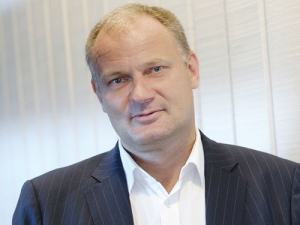 Zespri is only "scratching at the surface" of market opportunities in China.

The economic slowdown has had no effect so far, Limmer told Rural News. "We are still enjoying significant growth up there," he says.

"Obviously we are watching what is going on in the Chinese economy, but our assessment is that – in the area we are operating in and the competitive environment we are in – there is still strong growth for fresh produce.

"Imported produce which comes with safety and quality attributes still seems to be a massive area for growth."

Limmer says China and its markets are "incredibly complex" but in Zespri's area of the economy good growth persists.

"We are only scratching the surface by being present in those first tier eastern seaboard cities; growth will be significant for a few years to come."

NZ kiwifruit exports to China have grown annually at 50% for years.

"We've been growing at a phenomenal rate – it looks as though we will have a significant crop again this year. We have some Green volumes which are looking to be relatively consistent with last year which was a big year."

Last year's crop was about 80 million trays of Green and 30 million of Gold, a significant increase as the industry recovered from Psa.

"We are expecting another 50% increase of Gold volume and that is exciting in terms of the recovery and the opportunity in the market," he says.

"So a big crop is coming at us and China will play a significant part in our ability to get that all moved offshore and sold in the markets.

"We're expecting China will become our biggest market in the next two years – in volume and value. So there is more significant growth to come."

Japan is currently the biggest market for NZ kiwifruit exports and has been for years.

"Japan is still performing really well for us. There is pressure on the exchange rate with the Japanese economy being under so much pressure. But it is still a market which continues to grow positively for us and generate a good return."

Europe as one market represents about 40% of total sales, but sales are on a country basis.

"We are seeing a shift from Europe into Asia, and in Asia the growth in China and South-East Asia is creating that shift – so it is a much more balanced portfolio of markets for us today."

Growth is now moving beyond those tier-one cities in China.

"We are traditionally based in Shanghai but we are opening offices in Beijing and Guangzhou on the eastern seaboard. But also further inland in Chongqing and Xian, so our footprint is getting broader.

"We are starting to move inland into the second tier cities and see exciting opportunities for growth."