Boss woman has earned her stripes 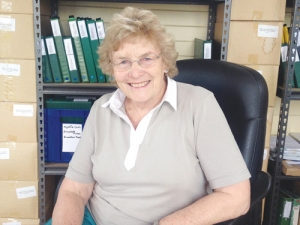 But the first female president of male fiefdom -- the Canterbury A&P Association committee -- is definitely no sop appointee. She has well and truly earned her stripes.

Hutchinson has been involved in ‘The Show’ -- as Cantabrians know it -- for at least 50 years.

Her first time was back in 1962, and although much has changed since, Hutchinson’s motivation for being involved remains more or less the same as when her parents, high country farmers, traveled from Double Hill Station in Rakaia, to the showgrounds five decades ago.

“It’s always been about having fun,” she said.

“I used to ride ponies and then I started judging and stewarding. It never entered my head that I would one day [be president]. I was just doing a job I loved and it’s the way it turned out.”

The show is New Zealand’s biggest of its kind by a big margin. At least 100,000 people attend each year, most of them Christchurch urbanites on public holiday outings.

Going to Show Day is a rite of passage for Canterbury kids, hence the atmosphere is convivial, except in the committee room, where 12 months of hard graft, God willing, comes to fruition.

Hutchinson, a mother of three, says preserving the show’s popularity is her main mandate rather than, as the committee’s first female president, any complicated ideology associated with equality and advocacy of women’s rights.

On assuming the mantle in April, Hutchinson said she was keen to have the show accredited by the Royal A&P society.

However, it seems that goal has been moved to the back-burner.

“I would still love to see it happen. It’s great for the kids to win a royal award. But I’m not sure if that will happen, mainly because of the cost.

“So the main goal now is to keep up the standard of the show and my biggest aim is to foster the involvement of the young people. They are the future of the show.”

In the lead up to the show Hutchinson commutes to Christchurch from Banks Peninsula.

She and her husband farmed Angus-Hereford cattle and Romney sheep on a Southern Bays property called Reids Hill, now leased by one of her sons. A second son farms nearby in Birdling’s Flat while her daughter (Katie Chamberlain, married to Westpac agribusiness manager Donald) farms a property in Leeston.

She has eight grandchildren, including five granddaughters following in her footsteps and riding steward at the show. Her heart will thus be in the pony ring during the three day event and not just because of the family ties.

Hutchinson rose through the ranks of the horse and pony committee and she served eight years as its president.

The general show committee had been one of society’s last male bastions until she and colleagues, including Barbie Heard of Kirkwood Pony Stud fame, Mary Snoop and Jackie Hill, assumed leadership roles in the show hierarchy.

“I don’t really feel like a pioneer,” she said. “They are the first pioneers as they were the first females on the committee. They had the ice to break, not me. And everyone has accepted my presidency readily and seems happy because of the work they did.”

With her first show now looming and the responsibilities that come with it, which include hosting a cocktail function and the many dignitaries who attend plus presenting hundreds of awards, Hutchinson is excited and little anxious.

“I will love it. I love the people and love the challenge of making things run well. I get a huge amount of satisfaction from it.

“Getting city people to the country is what it is all about.

“We get excellent feed-back, the odd grumble, but the proof in the pudding is people keep coming back to the show. Our numbers are not dropping off.”

A Timaru wool-broker has been elected the youngest-ever president of the Canterbury A&P Association.