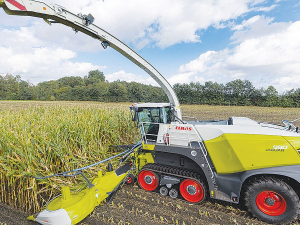 Claas is the first manufacturer to offer a dedicated rubber-track system on a self-propelled forage harvester.

Harvesting specialist Claas has only taken a little over three years to produce its 100th Jaguar Terra Trac-equipped harvester, which was first previewed as a prototype at Agritechnica 2017 before its commercial launch in late-2018.

The milestone Jaguar 990 machine left the assembly line at the Harsewinkel factory destined for a customer in North America, where the flagship model accounts for more than 90% of the Terra Trac machines sold in the region.

In an industry where tracks are becoming increasingly popular in all types of prime movers and harvesters, Claas is the first manufacturer to offer a dedicated rubber-track system on a self-propelled forage harvester. The company has units available for its 960 (653hp) and 990 (925hp) models.

The “tracks with everything” mantra within the agricultural sector appears to be well-founded, given increasing machine weights and a concern over damage to soil structure. These are problems that can be mitigated by reducing ground pressure.

Well-versed in the use of rubber tracks after fitting such units to its Mega combine ranges and through its joint venture with Caterpillar for Challenger prime movers, Claas has long been a champion of nurturing the soil by looking at opportunities to replace wheels with tracks.

In the case of the Jaguar TT, this was originally conceived to offer the benefits of low ground pressure to European farmers wishing to cut grass early or maize later in the year. The concept has also found favour in America, where the machine’s ability to cut maize on wet ground without forming deep ruts is greatly valued.

Customers in that region also point out the benefits of the smooth riding characteristics of Terra Trac-equipped machines when these move over ground that has been watered by central irrigation pivots. In these situations, the pivots tend to leave concentric circles of ruts, which the tracked foragers tend to ‘float’ over.

In the past, track machines have been criticised for scuffing the soil during headland turns. On grassland, this damages the sward, reduces growth and encourages weed infestation.

However, Claas has overcome this issue by developing a lifting system that pushes down on the central rollers. This results in the lifting of the track ends away from the ground and minimising any damage to the turf.