An ‘a-mazing’ set of records 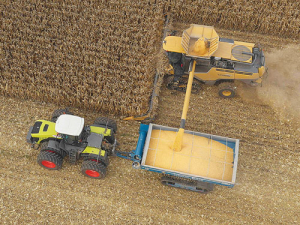 A US family-owned farming operation has set not one, but two new Guinness World Records by harvesting 1111 tonnes of maize in eight hours and then 1620 tonnes in 12 hours.

In doing so, the team at Stewart Farms Partnership, Yorkville, Illinois, easily cruised past the 1300 tonne, 10-hour record they set eight years ago.

The feat represents a throughput of almost 135 tonnes per hour or one truckload every 12 minutes.

Harvesting commenced at 9am in less-than-ideal conditions, with 12mm of rain having fallen the previous day. The grain bin was emptied at precisely eight, 10 and 12 hours after the work started.

The 1379 tonnes recorded at the 10-hour mark represents a 6% improvement on the 2010 record, which was attributed to ongoing improvements to the Lexion.

Claas has improved its popular Arion 600/500 tractors to coincide with the introduction of Stage V engines.

Claas Xerion gets on track