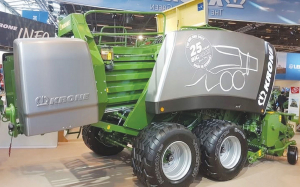 While the German manufacturer Krone can claim a history dating back 115 years, its large square balers are much more recent.

In 2018 it celebrated 25 years since launching its Big Pack baler, and has since gone for a range of different bale sizes — 19 different models to suit applications worldwide.

When it launched the Big Pack in 1993, the machine brought with it several innovations that today are used by many of its competitors.

Items like tandem axles have become the norm for bigger machines, and a chopper unit, back then with only three blades, has become a must-have for many contractors.

Likewise, the overload system on the Big Pack’s packer system moved away from a more typical shear bolt set-up to a clutch assembly that took the unit back to its previous position.

Along the way, Krone introduced its Variable Fill System (VFS) in 1999 -- four packers and a feeder fork, with the latter also doubling as a packer until the bale chamber is full.

The Krone Multi-Bale was claimed in 2003 to be the first baler of its kind, enabling users to make one large bale or up to nine smaller bales that can be bound into one bundle for easy handling. This proved popular with those looking to feed small groups, individual animals or stock in pens or stables.

The High-Density Press (HDP) arrived in 2005, reported to pack 25% more into a bale than its standard counterpart.

And in the same vein, 2007 saw the arrival of the Pre Chop, a front chopper unit that ‘guaranteed’ uniform chop lengths while also fragmenting the material being loaded.

In 2011, the Big Pack High Speed was claimed to deliver 20% higher throughput than the previous model, while maintaining density. And in 2013, the HDP 2 also brought increases to throughput and density.