Benefits many and varied of reducing soil compaction 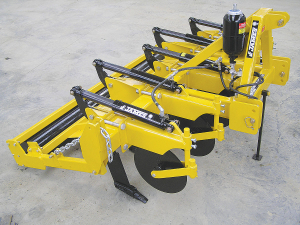 The James Soil Aerator is designed and built to overcome compaction in heavy soils.

For many years, reducing soil compaction has been recognised as an efficient way of increasing production for grassland and arable operations.

While there are many products in the market, key design features can have a major effect on the efficiency, horsepower requirements, output and ultimately final surface finish.

The James Soil Aerator was designed and built to overcome compaction in heavy soils. This is often demonstrated by surface ponding after rainfall, shallow root systems and restricted plant growth or output.

The five-leg aerator is a linkage-mounted design, centred around a heavy-duty frame for durability with inherent weight to aid penetration in difficult conditions. Operating to a working depth of 23cm, the initial lifting and subsequent ‘wave’ effect creates a vertical slot and horizontal fissures, creating drainage, oxygenation and deeper root systems.

The process also promotes the release of ‘locked’ minerals that are typically unavailable because of a lack of oxygen. MPI trials in Southland showed that ‘aerated’ paddocks on average produced 21.7% more dry matter over a 15-month period.

Up front, the machine has individual disc assemblies, which slice through the soil surface and shallow root systems. This allows easy entry for the aerator leg, as well as reducing surface damage to the sward.

Each of the five legs on the machine are manufactured from high-grade carbon steels, each is inclined slightly forwards to aid penetration and help ‘pull’ the machine into the ground. Each leg is fitted with an adjustable and replaceable shin to prevent excessive wear to the main part of the leg. At the base of the leg, a heavy-duty ‘frog’ assembly carries a replaceable point that creates the initial ‘lift’ and initiates the ‘wave effect’, which creates ground shatter and allows working depths of up to 25cm.

Integral to the machine is a hydraulic auto-reset system, which removes the problem of overload and the frustratingly time-consuming issue of broken shear bolts. Importantly, the machine can be easily adjusted to suit prevailing conditions, such as rock burdens or sub-surface timber. At the same time, it acts as a shock absorber system for the aerator and the tractor rear linkage.

At the rear of the machine, a full-width smooth roller and scraper assembly serves to level any surface imperfections, which ensures that aerated pastures or paddocks can be quickly returned to production.