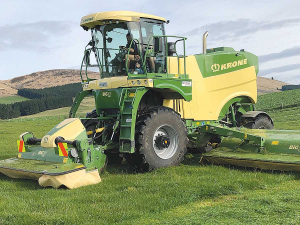 They farm bull beef, while also carrying out baling, silage and cultivation on contract.

Having done some research, Walling purchased a set of triple mowers in late 2018 for delivery at the start of the next season.

However, in July 2019, he was asked to tender on a Krone Big M 450 self-propelled mower that had only done 370 hours since new.

After assessing the machine with mechanic Tim McFarlane, it was purchased, repaired and worked the last season – between September and March 2020. Meanwhile, the new triple mower remains parked up and unused.

“It’s quiet, comfortable and has great visibility. It’s a brilliant machine with a brilliant motor,” Walling says of the Big M.

“We have been right inside it, taking the pistons out and it is rock-solid. It works at 1700-1800rpm and hardly uses any fuel.”

The Big M has a six-cylinder 449-hp Liebherr engine that works at 1700-1800 rpm. It is frugal on fuel and never runs out of horsepower. With three mower and v-tine conditioner units, the Big M has a working width of 10 metres.

Ground pressure is hydraulically controlled and easily changeable, with the operators choosing to set it so the mowers float as lightly as possible without bouncing. During mowing, the operator can also alter the cutting height using pre-set buttons on the joystick, with a resume feature making it easy to return to a pre-set height after lifting over rougher areas.

Having taken on grass, whole crop, tick beans and oats, the Big-M has also cut and windrowed a 1.3 metre triticale crop. Walling says the most difficult crop it has done was a paddock of wheat mature enough to head, which was close to maturity and better suited to a combine harvester.

Although the abundant horsepower means the machine could easily work at 20km/h, Walling says it would start bending things and wrecking the machine.

“Tim is an excellent driver. He may travel up to 15km/h in a smooth paddock that he has mown in the past. Otherwise it is more like 10-12 km/h.”

The versatile Big M can leave the crop flat or grouped into one, two or three windrows. It can also place an offset swath to one side by closing one swathing hood. This could be used when mowing along a fence line or trough, or in lighter rows to throw the crop to one side to make bigger rows.

The machine can be followed with a 12m rake to bring almost 20m into a row and speed up subsequent operations.

Among the Big M’s other features is a clever transport mode, where the mowers are folded, and the axle height lowered to keep the whole machine within the legal height on roads.

Likewise, traction control offers the choice between performance and traction, with two pre-set values ensuring the machine keeps moving. Another feature sees automated side-shifting of the front mower, controlled by a wheel angle sensor to eliminate unmown strips on corners.

“But we are now sold on the Big M and wouldn’t go back.”