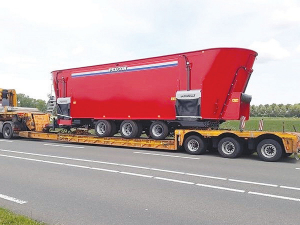 The big mixer wagons seen in New Zealand have a long way to go in size to rival the behemoths used in North America.

One such US spec machine – now on its way to the US and described as the world’s largest mixer wagon – recently left Dutch manufacturer Peecon. It has mind blowing capacity of 70 cubic metres.

This is the largest model in Peecon’s aptly named Biga Mega Mammoet range. It has four vertical mixing augers, carries a load of at least 28 tonnes and requires a tractor of 250hp+ to power it.

The feeder, en route to Marloo Equipment, Michigan, joins several machines already delivered to the US.

Machine statistics give an idea of its size: length at least 13m, width of 3m and tare weight at least 24 tonnes.

Standard features include four hydraulically controlled discharge doors – two each side, a separate chassis with integral multi point weighing, and a semi automatic powershift transmission to allow reduced start up loads and a smooth build up to optimal operating speed.