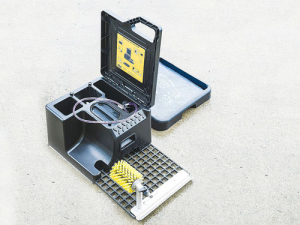 The Jacson Cube, a portable all-in-one boot cleaning and disinfecting system that folds to go into a ute or car boot, alows rural professionals to arrive and depart farms without raising disease risk levels.

Jacson3 business partners Rusty Knutson and Jacqui Humm have spent two years developing the idea after Knutson – whose work was collecting calves for export – saw many farmers struggling to prevent rotavirus and cryptosporidium spreading between mobs of animals.

The polypropylene Cube has three main components: body, lid and car-boot tray/footbath, which weighs 10kg empty and 15kg filled with water or disinfectant.

It has a rotating brush mounted on an aluminium spindle, in turn attached to a rhino-plastic grating designed to keep debris and contaminants away from the boot. A hand-brush can be used to shift stubborn debris while using the integrated handle in the lid for support.

The unit’s spray applicator draws disinfectant from a 3L reservoir and has a spray tip with enough pressure to shift debris.

It takes about one minute to set up and a couple more to pack away.

A ball-valve trap controls liquid flow and the body of the unit has storage for disinfectant, gloves, wipes and hand sanitiser.

For set-up the unit is connected by a 13-15mm hose-tail which directs liquid up to the brush assembly where it cascades over and under the footwear, with the motion causing the brush to rotate.

A tray is provided for holding the unit in a car boot; this can double as a footbath if used with an optional integral disinfectant mat.

The Cube can operate without a water source by using the integral reservoir.  Price $549 + gst.