Cane family on the 'Case' 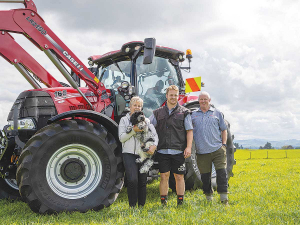 Sam Cane (centre) is pictured with his deer farming parents Kathy and Malcolm in front of their Case Puma 165.

All Black captain Sam Cane has a reputation for tenacity and getting the hard work done.

It’s a trait that must run in the family genes when you look at the farming career of his parents, who farm at Reporoa on the Central Plateau.

Starting out as teenager, Malcolm began a hay-carting business, moving about 100,000 bales each season, contract fencing in the off-season and doing an 18-month stint working for a local dairy farmer. After seven seasons of hay-carting and fencing, then age 22, he was able to make a down-payment on an 80ha block in the area.

Back then, bankers were pessimistic about farming and there was little to spare.

“We had fifty grand and 50 deer and still had to go to about three banks because interest rates were about 19%,” says Malcolm.

Even 10 years later, the Canes had not fully stocked their 80ha, so alongside their own stock, they grazed animals for others, while still maintaining the off-farm fencing business to keep ahead of the struggle.

Now, around 30 years on, having experienced the ups and downs of the venison meat and velvet markets and keen to spread risk, the Canes went into partnership in a hunting block in the Paeroa mountain range known as Broadview Hunting estate.

As a side-line to the trophy hunting and selling velvet to New Zealand agents, Kathy also produces and distributes Canes Deer Velvet, a business built up gradually over the past 20 years, producing about five tonnes a year, as capsules and raw product.

Malcolm’s father, Laurie – a Reporoa dairy farmer – only ever had Case Internationals, so he got started with the brand too, using a small International with a hay sweep. After about 15 years of running a tight ship, Malcolm bought two Case IHs: a 115 and a Puma 165 from Giltrap.

Malcolm Cane prizes his tractors because they offer a degree of farming independence, like his own hay-baling gear, that literally allows him to ‘make hay when the sun shines’. Producing 1500 baleage wraps a year with a Kuhn baler, the ability to cut hay on demand – usually up to five times a year – is priceless for the deer, as they tend to be picky eaters.

“Deer are that fussy that we cut the lucerne every 30 days. If it’s left any longer it’s not very palatable for them,” he says.

Case IH and Giltrap Agrizone recently loaned the Canes a new Puma 165 CVT in a sponsorship arrangement in conjunction with their All Black son Sam, who remains a farm boy at heart despite being a professional rugby player.

Malcolm says while he probably won’t use all the electronic features in his new Puma cab, he’s enjoying many of its features and it’s a nice smooth ride.

“Put it this way, you don’t really feel like you’re working when you’re sitting in it.”