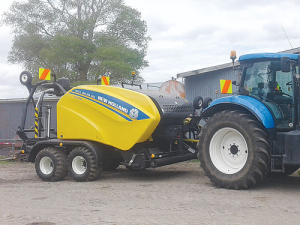 Increasing bale output was key to Davidson Contracting upgrading to a New Holland RB125C combi at the start of the season.

Increasing daily bale output was a priority for Davidson Contracting and the key reason for the firm’s upgrading its NH BR 6090 baler to a New Holland RB125C combi at the start of last season.

The father-and-son team of Colin and Michael do hay, balage, straw, ground work and general cartage around the Wanganui district.

The business bought its first combi baler-wrapper machine four years ago, with the aim of removing a tractor and man from the baling/wrapping process, but over time became disappointed by the machine’s limited output.

“The BR6090 had served us well, but newer machines with more output were emerging,” Michael says. “So, it was time for an upgrade.”

Already running a large fleet from Norwood Group, including New Holland tractors and balers, Davidson Contracting wanted to stay with the brand. They chose the NH Roll Baler 125 Combi for its consistently high bale quality and increased productivity.

“The arrival of the RB 125 Combi has seen us increase output from 35 bales an hour with the old machine to up to 50 bales an hour, based on its ability to consume large volumes of crop,” Michael says.

Baling at a steady pace, Davidson Contracting last season made about 2600 grass bales.

For the 2018 season, the business plans to trial film instead of the initial net wrapping, a process said to exclude more air from the bales, creating better quality silage and tighter, more uniform bales.

After its first season, the RB125C is said to be easy to maintain and service, with large opening panels on either side offering good access to all key components. Michael says the use of brass bushes instead of bearings should mean longer life for the machine’s rollers.

Davidson says he cannot fault the baler and is exceptionally happy with it to date.

“Going from the BR6090 to this new machine is a massive technology increase, which happens with every new line of machine that comes out.”