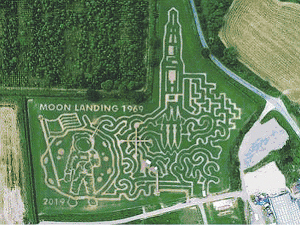 A British contractor recently demonstrated the capabilities of precision machinery in modern farming.

The maze, its theme celebrating 50 years since the Apollo 11 moon landing, was crafted in a single pass without manual intervention.

Tomlinson has done similar projects for 15 years, drilling a crop in two directions then marking the pattern with canes before manual hoeing. But this season it was much easier using the precision drill’s electronic section control and variable row width adjustments to get a new level of creativity.

“We took the design to a specialist, who wrote the software to allow us to use the drill to create the desired pattern,” Tomlinson said.

“We set the drill at 37.5 cm row spacing and used twice the normal seed rate. Using autosteer, electronic section control and RTK guidance to 1cm accuracy we created the maze and ended up with a spectacular result.”

In real life Tomlinson sows about 400ha of maize and fodder beet in the area. He says the drill’s accuracy of placement saves seed, cuts operator stress and results in a mature crop that’s easier to harvest.

The drill’s arrival, with its row selection control, variable row width and an integral micro-granular fertiliser applicator, will also help extend his seeding season for other crops such as canola.

Kuhn has announced the latest addition to its four-rotor GA rake series.