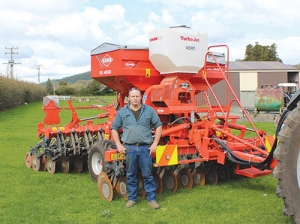 Paul Hunter's grows maize and grass silage for sale to local dairy outfits and in winter provides grazing for beef and dairy stock.

Hunter's operation consists of 230ha near Te Awamutu in Waikato.

Each year, around 170ha of flat-rolling land is destined for maize. Once harvested, the stubble is drilled with annual ryegrass which provides the winter feed, or silage crop for sale in the spring. The rotation leaves a narrow window for establishment of the grass crop before the cooler winter temperatures, and this created a need for the purchase of a drill to cover the ground rapidly.

In 2015 a decision was made to buy a Kuhn SD4000 drill which, with the help of some external contracts, has so far covered around 400ha.

Offering 4m of working width, and using a triple-disc layout, the 26 coulter assemblies allow a 150mm row spacing, while the wavy edged opening discs cut a slot and create a tilth to encourage rapid establishment. A 250kg downforce on each disc assembly ensures positive penetration in all ground conditions.

Double disc seed coulters work in with rear press wheels which control drilling depth; these have parallelogram linkages which allow plenty of movement for contour following. The coulter mounting frame incorporates a central pivot point that allows the drill to articulate, thereby allowing the rear coulters to follow the path of the opening discs, particularly when turning.

The machine is usually supplied with a single hopper, but the local dealer also fitted a second Stocks Ag hopper and metering system which allows the drill's original hopper to be used for fertiliser, while the secondary unit is used to deliver seed; this effectively creates a low cost double box drill.

Hunter says "the unit is easier to pull than the drill it replaced, and although 1m wider it is still pulled over the rolling terrain by our 185hp tractor". He also notes that the seed depth and coulter layout for contour following are superior, and that the calibration was simple and extremely accurate.