Final defence of a mighty realm 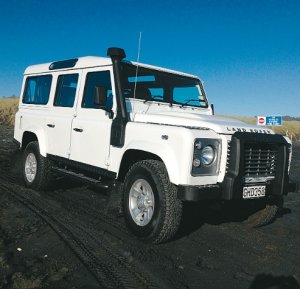 WHEN DRIVING a genuine motoring icon you tend to forgive shortcomings, especially when you are driving the last of the breed.

The Defender, Land Rover’s brand touchstone, has fought a good fight, but time has almost overtaken the old girl. To meet tough EU emissions standards Land Rover has dropped a modern turbo-diesel engine under the hood to extend its life; modern safety standards will be harder to meet with what is fundamentally a 60-year old design. A replacement is in development.

The cleaner engine is a 2.2L 4-cylinder – an honest toiler, though not particularly refined, which produces ‘power’ of 90kW @ 3500rpm and torque of 360Nm @ 2000rpm. Not quick but it gets the job done and does not exceed the limitations of the chassis as a more powerful engine might.

The rest of the mechanicals are old school and rugged: beam axles at both ends, heavy-duty suspension, high/low range transfer case and permanent 4WD, augmented by modern technology in the form of anti-lock braking and electronic traction control. Suffice to say, it will drive over almost anything off-road.

The interior is more liveable than older Defenders and equipment levels attempt to support the $71,500 price. The 110 Station Wagon we drove had electric windows, partial leather trim, air con, central locking, etc – all stuff you’d expect as standard in most vehicles these days. You’re paying a premium for the badge, let’s face it.

We could write screeds about the shortcomings of this vehicle if we were to judge it by modern standards. As we said, it’s an icon, so let’s judge it on its own merits.

The overriding impression left by the big white Defender is that it’s a huge amount of fun. Every trip is an adventure. There are few ‘new’ cars left in which you have to be so fully involved in driving – as opposed to just sitting and steering. Every gear change is a deliberate effort, every corner must be considered in advance.

It’s no hardship though. Driving the last of the old Defenders is a glorious affair, rich in nostalgia, and yet the car functions well enough in the modern world if you avoid tight urban environs.

And did we mention fun? Just ask all the other Defender drivers that waved enthusiastically when we passed by; they understand.

Jaguar Land Rover has announced a new global strategy that will see the Land Rover brand release six pure electric variants through its Range Rover, Discovery and Defender families, with the first all-electric variant arriving in 2024.

Sure to blaze a UK trail

News noted last year that the price of the Land Rover Discovery 6 was right up there, perhaps too high to get the vehicle out onto farms.

The saying goes “the only good thing to come out of Birmingham (UK) is the M6 motorway”, but just a few miles down the road in the heart of the Industrial Revolution, is Solihull, the home of the Land Rover.