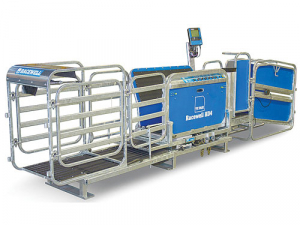 Te Pari recently released its Racewell HD4, a four-way sheep drafter the company sees progressing the concepts in its HD3 and HD6 units in use in New Zealand and elsewhere.

The sheep handler is said to enhance efficiency by reducing operator and labour requirements, most obviously with its fourth drafting gate.

Te Pari says the extra versatility should require few changes to existing farm infrastructure -- no more than another fence and gate to split one of the yards.

Customer feedback at field days and farm visits by sales and technical reps have brought to light the ideas, says Matt Shieffelbien, who has helped develop the HD4.

“I saw that the drafting process often needs to be done twice to separate the lines my clients needed,” he said.

“With the HD4 it becomes a one-man operation with just one pass to sort weight ranges and to identify stock that may be sick, injured or missing an eartag. Weighing, dagging, vaccinating or drenching and drafting can now be done in the same session with the help of the new, compact multifunction remote.”

The control panel of the HD4 has been updated to simplify use and increase reliability.

A revised layout sees cables running along the sides of the races and a protective panel prevents damage by inquisitive animals.