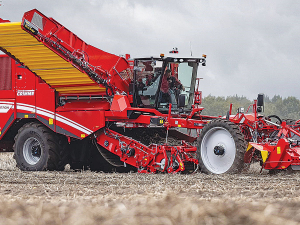 Grimme has announced updates to the third generation of its Varitron 470 self-propelled harvester.

Further new features include the Speedtronic-web system. This provides automatic speed adjustment, allowing the main webs to be controlled according to forward speed and crop load.

Additionally, the rotational direction of the extraction unit can now be reversed, allowing the rollers to operate in an extraction or transfer mode. For the upcoming season, the Varitron 470 is also supplied standard with the CCI 1200 operator terminal.

The updates, included on wheeled and Terra Trac versions of the 470 also include a 460hp Stage 5 engine, brighter LED work lights.

There are also a range of intake configurations for harvesting potatoes, onions and carrots.

Meanwhile, Grimme’s two-row Evo 280 self-propelled machine can now be optioned with a 6.0 tonne, NonstopBunker, or a larger 7.5t capacity version, which despite its larger dimensions, still sees the harvester’s overall width remaining below three metres for road transport.

The ISOBUS-operated machine, available with a wide range of different separators, is equipped with automatic steering and telescoping axle that also keeps the road width below three metres.