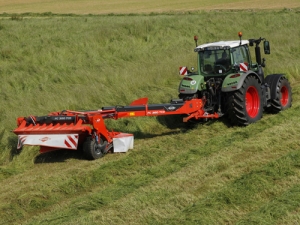 Suited to large scale operations and contractors, the machine offers all the advantages of the existing 3.1m FC 3160 TCD units, such as the versatility to mow on either side and the elimination of headland 'dead time' said to reduce output by up to 15%.

It also adds the option of being able to bring two swathes together.

The machine uses a conveyor belt either to place two rows side by side for harvesters, or interweave two rows to form a narrower swath for balers or loader wagons; the outcome is lower fuel consumption by reducing 'rowing-up' passes and it helps improve soil structure by reducing the amount of traffic over a given area.

The grouper conveyor belt is driven by a hydraulic pump mounted on the machine's Gyrodine swivelling headstock, and is capable of delivering swathes to left or right of the mower
Control is via an in-cab unit allowing the operator to adjust belt speed to cater for varying amounts of crop, adjust the width of the swath being formed and lift the unit in and out of work.