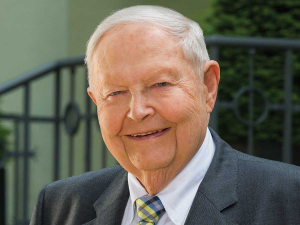 Claas was born in 1926 in Harsewinkel, Germany, to parents August and Paula who managed a small agricultural machinery firm with a workforce of around 100. After completing an apprenticeship as a machine fitter, then some practical experience in metalworking firms, Claas joined his parents’ family firm in Harsewinkel in 1958.

In 2003, he succeeded in taking an important step towards the company’s future by making it a long-line supplier, when CLAAS took over the complete tractor business from Renault Agriculture in France.

Helmut Claas oversaw the company’s greater internationalisation with the establishment and expansion of production sites in Russia, the USA and China.

He was also a farmer, running a farm in East Anglia in Great Britain, where he spent time with his wife Erika and enjoyed keeping in touch with farmers in the neighbourhood and indulging in his passion for hunting.

Moving forwards, the Claas Group will be steered by his daughter, Cathrina Claas-Muhlhauser.

CLAAS has extended the versatility, productivity and user comfort of its CARGOS dual purpose transport wagons with the addition of new steering options, increased capacity and an ISOBUS terminal.