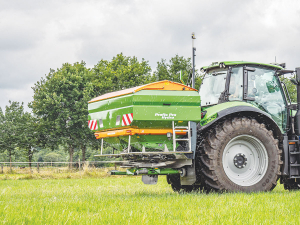 WindControl is a fully automatic system that effectively neutralises the effect of wind upon fertiliser spreading operations.

Amazone's recently released WindControl System automatically monitors and adjusts the spreading pattern to compensate for the effect of the wind on the company’s top-of-theline ZA-TS mounted and ZG-TS trailed twin disc centrifugal spreaders.

CLAAS Harvest Centre product manager for Amazone, Steve Gorman, says even minor changes in wind speed and direction can have a significant impact on the distribution of valuable fertiliser.

“Headwinds or tailwinds can stretch or compress the spreading pattern, while crosswinds can shift the pattern laterally,” he says. “These changes can result in significant differences in application rates within the same tramline and from one tramline to the next.”

WindControl is a fully automatic system that effectively neutralises the effect of wind upon your fertiliser spreading operations, helping you to make the most of your application window. The system utilises a highfrequency wind sensor to record wind speed and direction. The job computer calibrates this data with ground speed, calculates new spreader settings and then makes these adjustments automatically.

In operation, if there is a crosswind, the disc speed on the side facing the wind is increased and the delivery system is rotated outwards. At the same time, the speed of the downwind side is reduced, with the delivery system rotated inwards. The adjustments to both discs automatically counteract the wind effect and ensure accurate distribution.

The control terminal displays wind speed, direction and gustiness. In addition to all the usual spreader settings, it comes with a ‘traffic light’ colour system to advise the operator to what extent the system can compensate for the effect of the wind.

If the wind is too strong or gusty, the system will issue a warning that the limit of control has been reached.