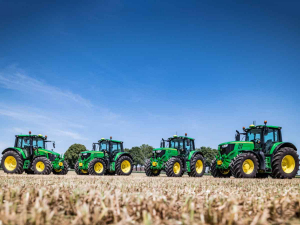 So he must be getting excited about the news of the new 6M series following its recent launch in Europe and North America.

Now not far from NZ, the new 6M will replace the current 6M, 6MC and 6RC ranges, with models in 4- and 6-cylinder layouts.

They will be powered by engines to Tier 4 Final emission regulations and have a new raked hood that offers much better forward visibility, particularly when combined with a frontloader.

This is also enhanced by a slimmer steering wheel cowl and can have an optional panoramic cabin roof.

Despite their reduced wheelbase, the models retain the full-frame concept, allowing the four-pots to operate at a maximum weight of 10.45 tonnes, with a useful payload of 4.7t.

Also new for the 6M is a cabin rated to a 70dB(A) noise level, with controls to the right of the driver and a comprehensive display panel on the right-hand A pillar.

The new 4-cylinder variants will have 4.5L Power Tech EWL engines and Intelligent Power Management (IPM) to boost output by an extra 20hp in PTO and transport tasks. The existing 4-cylinder units use the PSS block, while the 6-cylinders take the 6.8L PVS engine, both to Tier 2 emission standards.

Gearbox options will include Power Quad, Auto Quad and Command Quad Plus. The first two variants have four-step powershift, while the Command Quad Plus will effect automatic gear and range changes without use of the clutch pedal.

Other notable features include EcoShift that delivers 40km/h at only 1590 engine revs and AutoClutch that brings the tractor to a stop with just the brake pedal, said to be ideal for loader work.

They are said to be easy to configure for multiple situations or operator needs.

The new series can be equipped with up to four mechanical or electrically activated remote hydraulic valves, with the latter option a first for the 6M series.

All models can be equipped with the Starfire 6000 satellite receiver and the 4240 and 4640 Greenstar display terminals. Depending on the level of precision required, when using AutoTrac automatic steering SF3 and RTK signals and the free SF1 option are available.