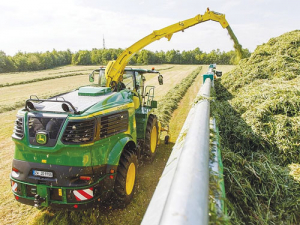 The wraps are off the new John Deere 9000 series SP harvesters.

Snippets during the last few months about the new John Deere 9000 series SP harvesters no doubt originate in the ‘mothership’ and are disseminated by social media.

Now the wraps are off, with official photographs and confirmed specifications; twin, chromed exhaust stacks and a J.Lo back end hint at where they’re headed.

Rural News understands that several existing 8000 series machines will remain in the product offering. It is expected the 8600 will become the flagship of that series, with the same 13.5L/625hp engine as the entry level 9600 machine.

The range has undergone several changes, including an 850mm crop channel that feeds a 670mm diameter drum that carries 40, 48, 56 or 64 chopping knives. Add to this an improved mainframe to deal with higher loadings, a reinforced driveline in the same vein and optimised component speeds: all are said to increase efficiency and form the basis of JD’s new HarvestMotion concept.

The kernel processor/corn cracker for the range merits attention; it has the optional XStream KP unit developed with US specialist Scherer.

It has a roller diameter of 250mm and a roller speed differential of 50% to create a ‘scrubbing’ effect; it is said to achieve the higher kernel processing score authenticated by independent test institutes.

Processor rollers are fitted in a saw-tooth profile on the Premium KP unit, with either saw-tooth or a new X-cut design in the XStream unit; this has a spiral-cut groove across the roll surfaces. Interestingly, the XStream KP is fitted with in-built temperature sensors to keep the operator informed of bearing temperatures.

The 9000 series is available with JD’s AMS precision farming systems that include the HarvestLab 3000NIRsensor to measure crop yields, moisture and other constituents; AutoTrac steering; RowSense guidance and ActiveFill Control to fill trucks or trailers.

John Deere has launched its next generation of self-propelled sprayers.

Tractor of the future?

John Deere looks to be heading towards autonomous tractors.