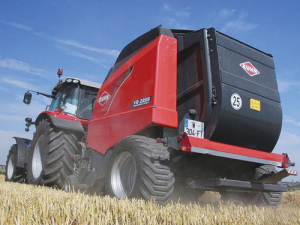 French machinery giant Kuhn bought the Vicon baler business and its factory in Geldrop, Holland, in late 2008 and has continued to develop the product ranges, now offering a choice of up to 16 variable chamber machines.

Two new machines added to the range for the coming season are the VB 2265 and 2296 models. These follow the same layout as existing 2200 series machines, with 230cm pick-ups, bale formation by three rollers and five belts and progressive density control.

Aimed at the contractor market and dubbed the ‘heavy duty option’, the progressive density control – which comprises a belt tensioning arm, twin hydraulic cylinders and compression springs – is now subjected to greater operating pressures to control bale density from the core to the exterior.

The increase in pressure from 180 to 235 bar has necessitated an upgrade to the machine drivelines with larger size and increased quality drive chains, lubricated
by the BaleMax continuous oiling system. Driveshafts now also use heavy-duty universal joints to deal with increased torque loadings and a second driven roller on the belt drive system ensures positive bale rotation.

Durability of the machines is further enhanced by Hardox wear plates in the pickup area and on the rotor feeder tine points.

Contractors will also welcome the fitment of oversize 500-45R22.5 tyre equipment, which will help deal with increased bale weights on difficult ground. There’s also ISOBUS connectivity that will make hitch-up a breeze for suitably equipped tractors, as well as including features such as monitors connected to external cameras.

“We have already sold a number of units for the coming season, and although there is a possibility of delivering higher bale weights, we think that current weights are probably enough,” Brian Robertson, operations manager, Kuhn NZ, told Rural News.

“If that’s the case, we think users will probably run the units at around 70% density to deliver similar weights, but with less stress and achieving a longer service life by the machines.”

In a move that appears to have been repeated by many equipment manufacturers, Kuhn confirms it currently working on several autonomous solutions – particularly in the area of feeding.