Local tractor sales hold up despite tougher times on farm 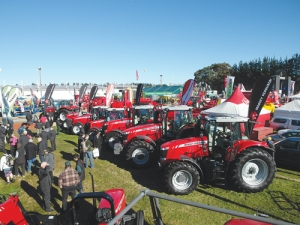 Tractor sales are down but there are signs it is not all doom and gloom.

As we approach National Fieldays, the foggy season has arrived in Waikato, but it’s not all gloom and doom.

Machinery editor Mark Daniel recently caught up with Ian Massicks, president of TAMA (Tractor and Machinery Association) who gives an overview of local and international tractor sales for the first quarter of 2015.

Total tractor sales in New Zealand amounted to 90 units against 1085 for the same period in 2014 – a drop of around 17% and not as bad as some doom-mongers were predicting.

Massicks notes that while there appears to be some belt-tightening in the main dairy areas, other sectors such as beef and sheep, orchard and viticulture, were showing upward trends. Kiwifruit was even staging a mini-comeback as growers appeared to be winning the fight against PSa.

“The weather has been favourable over the late summer/autumn period and many potential purchasers saw the current climate as a ‘blip’ on the radar and have continued to invest for the longer term,” he told Rural News.

Massicks also points out that with only four months of the year gone there is still plenty of time to catch up the decline in sales as the global supply chain recovers.

On the flip-side, sales of tractors over 200hp took an 8% hit in the quarter. Sales of combine harvesters have shown a massive rise of over 47%, with sales recorded at 34 machines versus 23 in the previous year.
The Australian TMA (Tractor Machinery Association) notes a number of factors causing this upswing: rain in the key growing areas, and a threat of increased purchase prices as the Australian dollar drops in value against supplier countries. This seems to be bringing purchases forward. Then there are the exceptional finance schemes, some as low as 1.9%, which has helped sales.

Meanwhile, around the world, things weren’t quite so rosy with CNH citing “unfavourable market conditions in all areas” for a cut in production of around 40% in its factories, and a prediction that the total market for the 2015 year would shrink 5-10% by volume.

AGCO, the manufacturer of brands such as Massey Ferguson, Fendt and Valtra, has also reported production cuts of around 21% and a revised forecast of the market dropping by 19-21% globally. The company reports that European sales are gloomy, citing low commodity prices, high grain stocks and poor crop production forecasts.

Machinery dealers around the country have reported a substantial increase in sales of both tractors and farm equipment compared with the same time last year.

Demand for agricultural machinery and equipment has kicked 2021 off to a fantastic start, following the momentum that built during spring and summer of 2020.

Aussie machinery sector booms on back of government incentive

New tractor sales in Australia look to be on track to hit the 14,000 mark for the year.