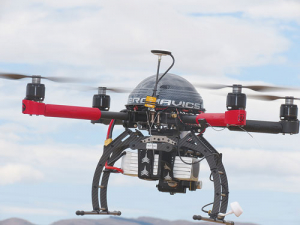 Drones are new technology being used on farm.

New Zealand farming has never been slow in innovating to tackle day-to-day problems encountered on the land.

Look at such ideas as the electric fencing developed by Gallagher Group that now controls stock around the globe, or even the humble bale feeder which makes the back-breaking task of unrolling bales a breeze compared with doing it by hand or using a hay knife.

While both these innovations save time and energy, they also go a long way to making the job much safer. So perhaps it’s time to look at more modern innovations in a different light and consider how these can be incorporated into today’s farming systems to achieve these same three goals.

The backbone of any farm is likely to be vehicles — tractors, utes, quads or UTVs. However, their use brings potential for injury, particularly on adverse terrain. Replacement policies should consider alternative vehicles, not just based on the task at hand but also in terms of the load to be carried, the number of passengers and, not least, the overall effect on farm safety.

This might mean upgrading from a quad to a UTV or even declaring some difficult areas of a farm ‘no vehicle’ areas.  Modern technology might offer a solution in this latter case, maybe using a remote-control drone to send live-feed pictures to monitor livestock, or even developing that technology to muster stock off inhospitable areas.

Similarly, automated gate systems, e.g. high-tech units with push-button remote activation or even drive-over gates, allow passage from different areas without the need to dismount quads or UTVs, step down from tractors or get in or out of a ute. This saves time and energy and removes the risk of runaway vehicles.

At a more mundane level, emerging technologies are offering the means to shepherd animals around a farm using remote-control transponders, lessening the need for operators to come into close contact with heavy animals.

And in woolsheds, clever selection of new plant and machinery can see a shearing machine equipped with electronic control systems that eliminate lock-up, so reducing damage to stock, and equally importantly removing the risk of sprains or broken wrists to operators.

Likewise, the chance to update or re-think the layout of a new animal handling system offers several opportunities: removing stress from animals moving through the system, and keeping animals and operators apart but retaining ease of operation. This also drills down into close-quarter inspection of large animals with the use of automated head-bails to prevent users being ‘flattened’ by a stroppy beast, making drenching or dosing easier or using a motorised winch to lift the legs of animals for hoof trimming or treatment

The laying-up of a key staff member by injury at a key time can dramatically affect the running of a farm, particularly in time, money and overall morale.

Smart farmers will always be on the lookout for areas of a farm that might pose a safety risk to themselves or their workers and will welcome and integrate new technologies to remove those risks.