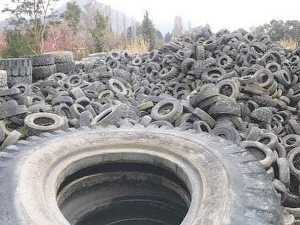 The scheme will aim to recycle the estimated 6.5 million tyres removed from vehicles each year in NZ.

While most farmers are always happy to ‘recycle’ used tyres by using them on top of a silage stack, these don’t make much of a hole in the total number produced in New Zealand every year.

Over the years, there have been many local tyre recycling initiatives. Invariably tyres end up in large piles in industrial areas or farmland and usually come to the notice of authorities only when there is a fire and/or pollution to waterways. Enforcement and fines typically lead to the pile being moved to another location and so the circle continues.

Thankfully, New Zealand’s first nationwide tyre recycling scheme will go live in 2023, thanks to a successful application for funding. Tyrewise will aim to recycle the estimated 6.5 million tyres removed from vehicles each year in NZ and plug one of the final gaps in the Waste Minimisation Act.

ASNZ governs Tyrewise, and its chair Mark Gilbert says they can now create the building blocks to allow it to commence operations. The scheme will kick off in August with an initial trial of four months in Hawkes Bay.

Said to be well supported by the vehicle and tyre industries, participation will be mandatory. The scheme will be funded by an advanced stewardship fee paid by the originator of the tyre arriving in NZ, whether fitted to a vehicle or a loose item. The aim of the scheme is to hit a target of 80% of annual waste tyres, being collected and recycled by year four.

In the case of the agricultural sector, it is estimated that around 205,695 EPUs (equivalent passenger units) are produced annually with each weighing 9.5kg. Currently, the disposal fee or levy payable by the tyre originators is likely to be $5.50 per EPU. In the case of a medium size tractor, this looks to be around $14.30 for a front tyre, rising to $44.50 for rears – leading to an overall levy per tractor of around $120. It remains to be seen whether importers and distributors will pass on this extra cost to buyers, which is likely to be “lost” in the purchase price.