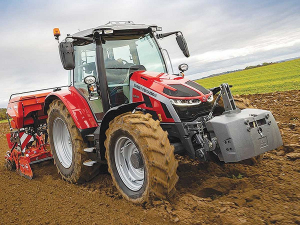 Just before Christmas, Massey Ferguson quietly released details of the successor to its popular MF 5700S range in the shape of the new 5S Series.

Sharing the same colour schemes and styling of the recently introduced 8S range, with its compact dimensions and a 2550mm wheelbase, the 5S Series is ideally suited to livestock or mixed framing operations.

Offered with three levels of specification – Essential, Efficient and Exclusive – as Rural News goes to press, final specs are still to be confirmed for the NZ market.

Power is provided by a four-cylinder, 4.4 litre AGCO Power engine, that in turn is mated with a 16x16 Dyna-4 or 24x24, Dyna-6, semi-powershift transmission. Exclusive and Efficient variants include an AutoDrive function that takes care of automated powershift changes during fieldwork or range changes during transport operations.

Featuring a redesigned rear linkage, now rated at 5.7 tonnes capacity, hydraulic systems range from 58 litres/min in the Essential model up to 110l/min – and up to 8 remotes – in the Exclusive version. Also new is a redesigned suspended front axle option said to deliver a super-tight, 4-metre turning radius.

In the cabin, the Exclusive and Efficient versions feature the same armrest control as the 8S models. While Exclusive also gets the Datatronic 5, Isobus compatible touchscreen layout. All models benefit from an improved ventilation system with better cooling airflow and demisting functions.

A factory source has told Rural News that the MF 5700s Series production will cease at the end of March 2021, with the new 5S range commencing soon after. However, stock of the 5700s will still be available in New Zealand beyond March 2021